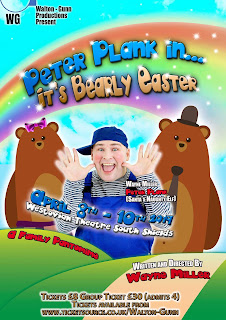 Walton-Gunn Productions are quickly becoming a pantomime mainstay in South Shields. After last year’s Easter and Halloween pantos, they’re back with ‘Peter Plank in…It’s Bearly Easter’. This tells the story of Mammy and Daddy Bear, who plan a picnic on a nice day out… only to be caught up in the dastardly world of villain, Gannabee Hellon. Hoping to use the bears to make money Gannabee Hellon hatches a scheme, only he doesn’t count on the plucky hero Peter Plank.

Returning to the role of Gannabee Hellon is Stephen Sullivan, an actor who is certainly no stranger to panto. He was last seen sharing the stage with the show’s star and writer Wayne Miller in the hugely popular Santa’s Naughty Elf. Stephen has gained great following and great critical praise for his panto work, making him very much a ‘go to’ performer. Last year he commanded the stage as Hellon and promises to make him even more evil, giving the audience plenty of opportunity to boo…

Another performer making a welcome return to the company is Melissa Cavanagh, who helped bring the spooky to the companies spooktacular Halloween show last year. After delighting audiences last October, she is delighted to return this Easter for some more holiday fun. Not only is she a top panto performer but one of the North East’s top vocalists, after wowing audiences on BBC’s The Voice she has audiences on their feet up and down the country. She hopes to sing up a storm as Mammy Bear when she returns to the South Shields stage next month. 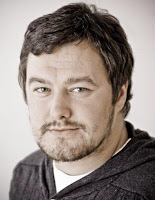 A fresh face to Walton-Gunn Productions pantomimes is actor Steven Stobbs. After wowing audiences in Aladdin as Widow Twanky at Christmas, he comes to the role of Daddy Bear with great enthusiasm. Steven was a long time player in the very popular Laffalang Gang who have performed to thousands over the years, delivering plenty of laughs along the way. Something he will no doubt be doing when he hits the Westovian Theatre in a few weeks time. 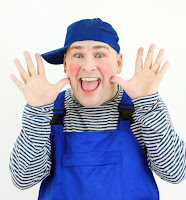 The final piece of the panto puzzle is complete with Wayne Miller returning as Peter Plank. The show’s creator is back to save the day once again as the lovable hero, who returns to battle with his arch nemesis. As a performer Wayne is most well known for creating and playing Elfluent; Santa’s Naughty Elf at The Customs House in South Shields. A show which celebrated its tenth year at Christmas.

Tickets £8 and £30 for group ticket (admits 4) from www.ticketsource.co.uk/walton-gunn
Posted by North East Theatre Guide at 19:26