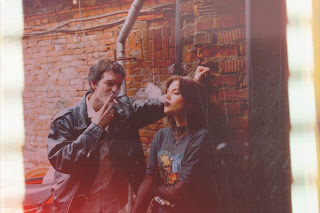 Written and Directed by Chris Connel

Based on the Book by Lucy Nichol

After success as a book, The Twenty Seven Club, a play about music myths, mental health and fandom, has been adapted as part of Live Theatre’s Elevator Festival. The challenge of turning a full novel into around 70 minutes of dramatic action has been a successful one and the result is not just a look back to the 90s but also the bigger issues that affect every generation.

April 1994 was a big moment for Generation X. Kurt Cobain has ended his life at the age of 27. As the lead singer, and guitarist, of Nirvana, his songs had resonated with a generation coming to terms with growing up. His departure hit many of his fans hard.

The Twenty Seven Club opens up with the reaction of one such fan, Emma, to the news. Rachel Teate is pouring emotion at the audience, who, if they are not familiar with the source material, will be wondering with this 26 year old is so upset. It is only later that she reveals to her mate Dave the reason of her torment.  Andrew Dawson fits in well in the role of confident, soul mate and drinking partner to Emma.

The Live Theatre show has moved from the book's original location of Hull to Newcastle. As a result the intrepid pair find themselves drinking their sorrows on the Boat, Maddisons and on Chilli Road and being refused entry for wearing trainers in Julies. This move will help make the show relatable for the Tyneside crowd. Whilst this reviewer was originally from Hull, by 1994 I too was watching the likes of Senseless Things at the old Riverside on Melbourne Street - which was also where Nirvana played their first ever UK/European gig. I mention Senseless things as they feature in the play as Emma is a massive fan and has tickets to go and see them.

This is 1994. Entertainment is on video tapes - remember when you had to rush the tape back before you got fined? If so you'll be able to relate to this era. It was also a time when John Major was Prime Minister and John Smith was reforming the Labour party. (Was Smith the best Prime Minister that we never had? - I digress, sorry.)  There were no mobile phones, so your every moment was not captured and sent around the world moments later either.

There is another element to the story which permeates through strongly - the mental health of the lead character Emma. Though the audience is given plenty to laugh at - and swearing to be offended by - there is a feeling of support for the problems that Emma is going through. Rachel Teate does a fine job of getting this balance right.

The third character that we are introduced to is Emma's Dad. Steve Byron was always going to give a great supporting performance as the single parent who did not expect the kids to come home early. Perhaps in future versions of the play there may be a chance to expand on the Dad's story too - but there's only so much that you can do in an hour!

Andrew Dawson's performance as Dave reminded my companion and I of someone. Someone who was very much a part of the Tyneside life in 1994. In fact he reminded us of the performances that we have seen over the years of the shows writer and director Chris Connel! There is something about not just what is said, but how it is said too.

Trigger warnings are needed (and given) as there are panic attacks, mental health issues and strong swearing. Indeed I heard a sharp intake of breath when Edwina Currie was described. This is a show for grown ups.

I know I have said this before about new writing at the Live Theatre...but I think this story has potential as a screen play. It certainly would work as a longer 2 hour plus interval drama. However, it is still perfectly formed in its current format.

As someone who was "there", enjoying the music scene in 1994 - as well as trying to cope as a young adult - I found the play worked really well. The acting, script and direction hit a sweet spot. It is canny play based upon a book that is well worth a read. (Though I must confess I was personally more into the Wildhearts than Senseless Things!)

The Twenty Seven Club will be performed at Live Theatre between 23 and 26 March at 7.30pm with a matinee performance at 2.30pm on Saturday 26 March. Tickets cost £8 full with concs £6. A filmed version will also be made available following Elevator Festival.

Tickets are available online from https://www.live.org.uk/whats-on/twenty-seven-club or from the theatre box office: 0191 232 1232 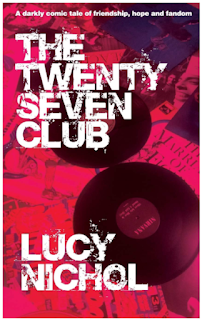 Released in 2021 in both paperback and e-book, The Twenty Seven Club is still available from Amazon.