Preview: Dara O’Briain: ‘So… Where Were We?’ at Stockton Globe

Dara O Briain is back on tour with a brand new live stand-up show. ‘So… Where Were We?’ will see Dara travel across the UK in 2022, kicking off in March with dates right through until December, including Stockton Globe on Wednesday 23rd March. 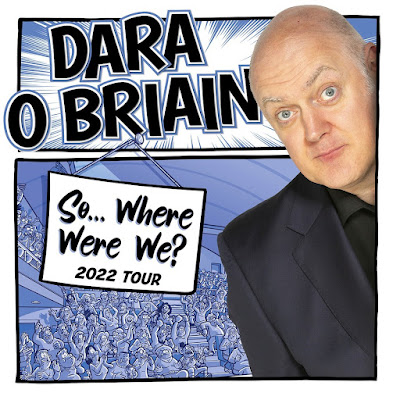 At the end of his highly successful last tour ‘Voice Of Reason’, Dara had performed the show 180 times over 2 years and across 20 countries, from Auckland to Reykjavik, from Moscow to New York; and by March 2020 he was ready for a break!

He would now like to apologise for saying that and will never wish for anything like that again.

Yes, he's back on tour, and he will never stop again, because that's clearly what caused all this trouble, oh, and he ate a bat.  Instead, in his new show 'So…Where Were We?’, Dara will hardly mention the last year and a half, because, Jesus, who wants to hear about that, but will instead fire out the usual mix of stories, one-liners, audience messing, and tripping over his words because he is talking too quickly, because he's so giddy to be back in front of a crowd.

Dara has made a name for himself as one of the most recognisable faces on British TV, as host of BBC Two’s long running hit panel show ‘Mock The Week’, ‘Stargazing Live’, ‘Robot Wars’, Dave’s ‘Go8Bit’ and Comedy Central’s re-boot of the classic quiz show ‘Blockbusters’.

It has recently been announced that Dara will host Channel 4’s newest daytime quiz, ‘One & Six Zeros’, where contestants will compete to win a grand prize of £1,000,000.

Dara has also put pen to paper with the release of three bestselling non-fiction children’s books all released by Scholastic UK:  Beyond The Sky: You and the Universe’ (2017), ‘Secret Science: The Amazing World Beyond Your Eyes’ (2018), and most recently in October 2020, ‘Is There Anybody Out There?’

Dara O Briain: So, Where Were We?