Returns to the Sunderland Empire this Spring 2022 with 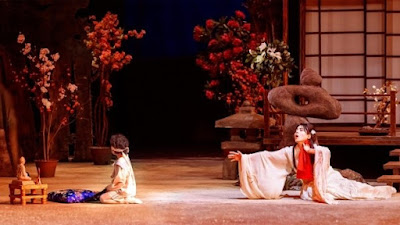 Madama Butterfly is Puccini’s popular tale which the hit West End musical Miss Saigon is based. One of the world’s most popular operas, Puccini’s Madama Butterfly tells the heart-breaking story of the beautiful young Japanese girl who falls in love with an American naval lieutenant – with dramatic results. Highlights include the melodic Humming Chorus, the moving aria One Fine Day and the unforgettable Love Duet.

With exquisite sets, including a spectacular Japanese garden and fabulous costumes including antique wedding kimonos from Japan.

Elena Dee* the international Korean soprano returns to delight us with her emotive and perfect portrayal of Cio Cio San in Madama Butterfly. She was spotted by Ellen Kent when she was working under the musical direction of the great Moldovan baritone, Vladimir Dragos. She was a talented classical pianist but was hoping to become a soprano. Ellen auditioned her and suggested she came back when she had acquired more experience vocally.  Ellen auditioned Elena again some years later and the rest is history. She went on to sing Aida, Tosca, Mimi and Madama Butterfly for Ellen. Her portrayals of these roles were stunning both musically and dramatically. Elena will also be playing Floria Tosca in Tosca.

Alyona Kistenyova*, the international soprano from Odessa National Opera will be returning after her critically-acclaimed performances in Aida, La Boheme, Carmen, Tosca and Die Fledermaus, Rigoletto, La Traviata and Madama Butterfly. Alyona will be singing Cio Cio San in Madama Butterfly and Floria Tosca in Tosca.

The Ukrainian tenor Vitalii Liskovetskyi* from the Kiev National Opera originally trained as a military pilot and made his debut on an Ellen Kent tour in 2015 in Carmen and Tosca, followed by subsequent successes in Aida, La Boheme and Nabucco, Rigoletto, La Traviata and Madama Butterfly. He will be reprising his roles as Don Jose in Carmen, Pinkerton in Madama Butterfly and Cavaradossi in Tosca. (“He was one of the best singers of the role I’ve heard.” Manchester Evening News Theatre Awards, Robert Beale).

Welcoming back the celebrated Romanian international tenor Sorin Lupu*, who has sung in all the major opera houses in Europe and on many of Ellen Kent's tours in Carmen, Tosca, Aida, La Boheme and Nabucco and will be singing the parts of Pinkerton in Madama Butterfly, Cavarodossi in Tosca and Don Jose in Carmen.

Petru Racovitae* the celebrated Moldovan baritone, returns to sing Sharpless, the American consul in Madama Butterfly. Petru will also be singing Escamillo in Carmen, and Scarpia in Tosca. He has sung many roles on Ellen Kent's tours and excelled in Scarpia, His memorable roles in Rigoletto, Nabucco, Amonasro in Aida and in Carmen as Escamillo will not be forgotten.

Vladimir Dragos*, the great Moldovan baritone, returns to sing Sharpless, the American consul in Butterfly and Scarpia in Tosca. Vladimir has played a very important role in our many tours with Opera & Ballet International and now returns to sing in an Ellen Kent production under the Senbla banner. He has toured the UK, Ireland and Middle East for Ellen. Vladimir has also sung Nabucco (Nabucco), Amonasro (Aida) Scarpia (Tosca), Rigoletto (Rigoletto), Ping (Turandot) at the Royal Albert Hall) for Ellen Kent.

Ecaterina Timbaliuk* the international Romanian Mezzo Soprano will be sharing the roles of Carmen and Suzuki in Madama Butterfly on the UK and Ireland international Ellen Kent tour.

Ellen Said: “My operas have to be emotional and beautiful.”

As with any of Ellen Kent’s shows all of the soloists have been hand-picked and directed by Ellen to create a visually beautiful and moving production of Madama Butterfly.

‘Her voice has clarity and soaring emotion’ The Stage, Madama Butterfly, Elena Dee

“Above all it was a production which captured the raw emotion at the centre of the opera. Don’t take a handkerchief with you, take a box of them.”  The Independent

“This is a Butterfly to cherish” Manchester Evening News

“The set and costumes were intricate and magnificent to behold. All the beauty of Japan was made real on stage, which added to the overall exquisite tragedy of the performance.” The Stage

This production will be sung in Italian with English surtitles.

Ellen Kent’s Madama Butterfly will play at Sunderland Empire for one performance on Tuesday 5 April 2022. Tickets priced from just £13* are available from the Ticket Centre on 0844 871 7615* or online at https://tinyurl.com/MBUtterflySund#

Please note that certain seats may have restricted views of the surtitles. Please check when booking tickets. All information is correct at time of release.

# A £3.65 transaction fee applies to telephone and online bookings. Calls cost up to 7p per minute plus your standard network charge.