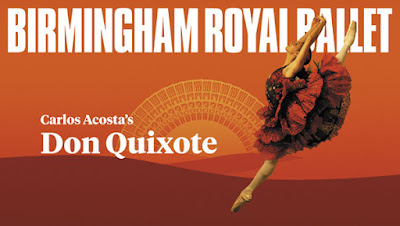 The Birmingham Royal Ballet are back in Sunderland this week with another entertaining ballet that showcases the talent of both their dancers and musicians. It is a shame that there are only three more performances as this is a show that is well worth seeking out.

Now, here is the thing...I was at this show with an open mind. I was not particularly familiar with it and I consider myself a novice when it comes to things "ballet". I found the story easy to follow - those elements of physical theatre that used to make silent cinema universal also work when applied to a show with no words. Plus there is often a lot going on. On stage you often have the principal dancers doing spectacular moves in the centre but there is also a lot going on in the fringes of the stage. For example  in the bar scenes you get to see life happening around the central action.

So what is the show about? As the blurb says: "In a new production created especially for Birmingham Royal Ballet and featuring all-new designs by Tim Hatley, Don Quixote (Rory Mackay) introduces us to Cervantes’ famous knight himself, lovers Kitri (Yu Kurihara) and Basilio (Lachlan Monaghan), and a host of supporting characters. As the Don sets out on a quest to track down his true love, with his loyal friend and servant Sancho Panza (Gus Payne) at his side, he finds himself embroiled in an unlikely adventure of love and dreams."

So we have a classic love story - coupled with brilliant dancing from both Kurihara and Monaghan - with the added twist that a rich nobleman called Gamache (Valentin Olovyannikov) is also interested in Kitri but ends up being the source of a few laughs in the show. Indeed these lighter moments help make the show accessible. Choreographer Carlos Acosta has created a show that is an ideal place to start ones journey with ballet if you're not familiar with it.

In the large company there are many other great dancers who get a chance in the spotlight including Alexander Yap and Sofia Linares as the matador Espada and the street dancer Mercedes respectively.

The other aspect of this show with cannot be overlooked is the large Royal Ballet Sinfonia, which needed a number of rows of seats to be taken out in order to accomodate them.  Under conductor Paul Murphy they did not put a foot wrong all night filling the venue with music originally composed by Ludwig Minkus and arranged by Hans Vercauteren. They were also responsible for a moving moment at the very start of the performance when they played the Ukrainian national anthem.

The show is in three acts of 50 minutes, 32 minutes and 35 minutes - with intervals in between, which is handy if you want to take the younger ballet fans in your family along. Certainly, for me, the show was well paced.

The talent on show is wonderful to see and I feel that we are lucky to see this company in our region as they always put on shows that are special experiences.

Tickets are available from the theatre box office and online from our affiliate ATG Tickets: https://prf.hn/l/75DpRVx