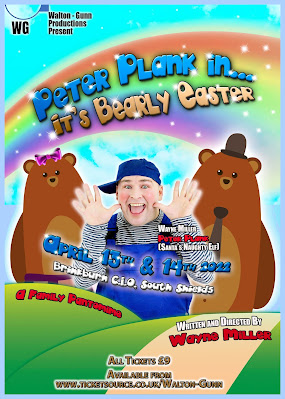 The show tells the story of hapless hero ‘Peter Plank’. After many adventures, Peter finds two new furry pals… Mammy and Daddy Bear. These lovable singing bears find themselves in danger from the dastardly villain Ganabee Hellon. Hellon has some sly plans for the performing bears, plans that must be thwarted. Can the villain be stopped before it’s too late?  Our hero Peter Plank will do everything he can to try.

Chloe Millar, who starred as Fairy Ferndew in ‘Rapunzel’ and ‘Arburthnot & Dickson Into The Piggieverse’ at The Customs House Theatre this year, will take on the role of Peter Plank. A role originally set to be played by fellow Rapunzel actor Wayne Miller. Wayne has been known to many in the North East as the writer and star of family favorite Santa’s Naughty Elf. The much loved pantomime for the under 7’s ran for eleven years before coming to an end.

Now being Peter Plank’s writer and director, he chose to step away from the role of Peter and cast Chloe. The obvious choice came  after being so impressed with her ability and work ethic.

“After seeing Chloe perform and working alongside her, I knew she would bring something special and fresh to the role of Peter Plank.  Here in the North East, we have an abundance of talent that are working so hard to get roles. I see that, and want to do anything I can to create opportunities and give them any chance I can to shine.” Says Wayne

Having top talent is key for the production and also for the students sharing the stage with Chloe and the other panto actors, which include Jen Stevens, Steven Stobbs and Erin Atack. These young performers are set to learn from the show's professional stars, knowledge they will take away, to make them stars of the future.

“Knowing the students will work alongside Chloe and the rest of our cast, is a great opportunity and achievement for the school. I know that there is so much to gain for any actor, dancer or singer in the art form of Pantomime and to have the chance to gain all that knowledge from professionals, is a dream for any young theatre maker” adds Wayne.

‘Walton-Gunn Performing Arts’ opened last year in South Shields, for anyone aged 6 to 16 to learn performance skills and have the chance to perform in professional settings. Based at Chuter Ede , the classes take place Monday and Wednesday evenings for the students to learn everything from acting to dance and creative writing to audition skills.

Information on Walton-Gunn Performing Arts can be found at

Peter Plank in…It’s Bearly Easter will be performed the 13th and 14th of April, 11:30am and 2:30pm @ Brinkburn C.I.O, South Shields, all tickets £9 are available from www.ticketsource.co.uk/walton-gunn