Returns to Sunderland Empire this Spring 2022 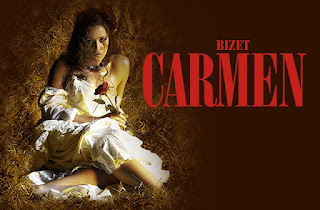 The award-winning producer Ellen Kent returns in Spring 2022 with the International Opera Festival tour, Carmen, at Sunderland Empire this Wednesday 6 April for one night only.

Bizet’s masterpiece, Carmen, is an evening of passion, sexual jealousy, death and unforgettable arias. Carmen is the story of the bewitching gypsy girl whose tantalising beauty lures a soldier to desertion and leads to her own murder. The opera includes some of the most evocative and best-loved melodies in opera –The Habanera, The Seguidilla, The Flower Song, The Chanson Bohème and perhaps the best-known baritone aria of all The Toreador’s Song.

The stunning new set reflects the magnificent architecture of Seville with its Roman and Moorish influences, which includes the main square, the bull ring and the famous tobacco factory. The set was built for Ellen Kent in England by Setup Scenery, who also build sets for the Royal Opera Covent Garden.

Ecaterina Timbaliuk* the international Romanian Mezzo Soprano will be sharing the roles of Carmen and Suzuki in Madama Butterfly on the UK and Ireland international Ellen Kent tour.

The Ukrainian tenor Vitalii Liskovetskyi* from the Kiev National Opera originally trained as a military pilot and made his debut on an Ellen Kent tour in 2015 in Carmen and Tosca, followed by subsequent successes in Aida, La Boheme and Nabucco, Rigoletto, La Traviata and Madama Butterfly. He will be reprising his roles as Don Jose in Carmen, Pinkerton in Madama Butterfly and Cavaradossi in Tosca. (“He was one of the best singers of the role I’ve heard.” Manchester Evening News Theatre Awards, Robert Beale).

Welcoming back the celebrated Romanian International tenor Sorin Lupu*, who will be singing Don Jose in Carmen. He has sung in all the major opera houses in Europe and on many of Ellen Kent's tours in Carmen, Tosca, Aida, La Boheme and Nabucco and will be singing the parts of Pinkerton in Madama Butterfly and Cavarodossi in Tosca.

Petru Racovitae* the celebrated Moldovan baritone, returns to sing Escamillo in Carmen, Sharpless, the American consul in Madama Butterfly and Scarpia in Tosca. He has sung many roles on Ellen Kent's tours and excelled in Scarpia. His memorable roles in Rigoletto, Nabucco, Amonasro in Aida and in Carmen as Escamillo will not be forgotten.

Introducing Vitalii Cebotari* as Escamillo. Vitalii is a young and talented Baritone. He was invited to join the National Opera and Ballet Theatre in Moldova. He has sung a wide range of roles including Don Giovanni (Don Giovanni), Count Almaviva (Marriage of Figaro) Figaro (Barber of Seville) Germont (La Traviata) Schaunard (La Boheme).

Ellen Said: “My operas have to be emotional and beautiful.”

As with any of Ellen Kent’s shows all of the soloists have been hand-picked and directed by Ellen to create a visually beautiful and moving production of Carmen.

“Impassioned and sultry” The Observer

“Hot-blooded, a joy” The Independent

“It is a stunning show, worth five stars all the way through” Brighton Argus

This production will be sung in French with English surtitles.

Ellen Kent’s Carmen will play at Sunderland Empire for one performance on Wednesday 6 April 2022. Tickets priced from just £13* are available from the Ticket Centre on 0844 871 7615* or online at https://tinyurl.com/cARMENsUNDERLAND*

Please note that certain seats may have restricted views of the surtitles. Please check when booking tickets. All information is correct at time of release.