Elysium Theatre Company return with another poignant play which coincides with Black History Month. This is a two-handed treat for theatregoers. A show that lays out its cards and lets the audience consider the morality of the situation. In short, it is a fabulous example of why theatre is a powerful tool for change.

I was pleased that I had a chance to read the programme ahead of the show. Whilst I was aware of South Africa and the issue of apartheid, I was blissfully unaware of the border wars between Soviet supported SWAPO (South West African Peoples Organisation) and the US/UK supported South African people. This border war in what is now Angola and Namibia was involved in a media blackout and that probably explains why I don’t call reading about it at the time. One of this production’s characters, Gideon, has recently returned from this conflict and it is clear from the off that the events in battle have been a part of his recent past. 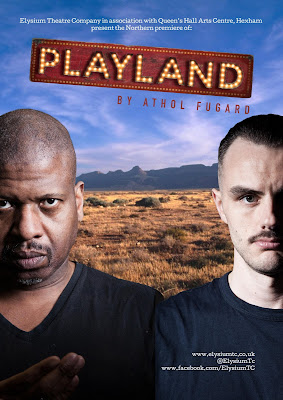 The play by Athol Fugard concentrates on New Year’s Eve at the end of 1989. Faz Singhateh appears as the God fearing Martinus. He is a man who truly believes in judgement day.  The setting for the evening’s events is a corner of the Playland fun fair which has landed in the South African wilderness. Martinus is the fair’s handy man and watchman. Crossing his path is former soldier Gideon. Danny Solomon appears as a man who is clearly suffering almost as much as the local chickens with temperatures in the high 30s in the shade.

At various points in the evening Gideon wanders into Martinus’s corner to chew the fat. Martinus for most of it carries out his job and watches the fair. Faz presents a cool character who knows his lot in a country in which his rights are somewhat diminished. Danny’s Gideon, though, is a lively man who is happy an awful year is coming to an end. Both characters are successfully explored by two accomplished actors. Director Jake Murray has enabled an even-handed approach to a well-paced show. The show runs for what felt like a quick 85 minutes, without a pace sapping interval, and emotions are presented without judgement.

Without any spoilers it is fair to say that this is a rich examination of faith, morality and evil that men do. I don’t understand the conditions that led to apartheid but this production makes me want to read more about it. But this show is much more than that as it explores the human interaction between two strangers.

Playland is a real theatrical treat.