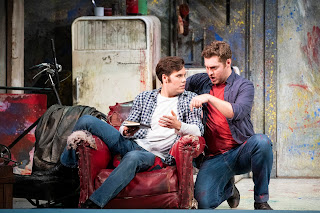 The wonderful Opera North are in town this week. They’ll be performing Handel’s Giulio Cesare on Wednesday and The Greek Passion on Saturday, but it was Puccini’s popular La Bohème that started the week off. 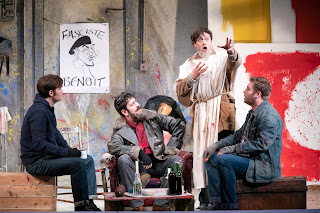 Perhaps its popularity is down to the simplicity of the story. The 19th century Paris of the original has moved to the early 1960s. The shift fits in well with the story and it helps to make the ‘boy meets girl’ tale relatable for a 21st century crowd. 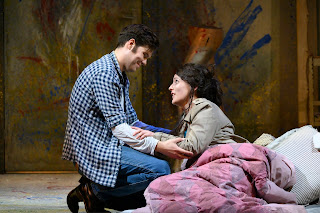 The first thing that strikes you when you arrive is the orchestra pit has been extended the length of the pair of boxes at the front. It is an incredible delight to hear the huge group of musicians filling the room with their swirling yet precise sound. Tonight’s conductor was Matthew Kofi Waldren and he kept a tight ship throughout. 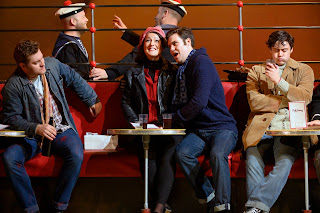 The show opens with the audience peering through a frame as two artists sing about how cold it is in their flat in the run up to Christmas. Marcello (Timothy Nelson) is busy painting a huge picture Tony Hart style. His flatmate Rodolfo (Thomas Atkins) stares out looking for some inspiration for his creative poetry block. The audience at this point is guided to the meaning of the Italian lyrics by screens either side of the stage. Act one is not a million miles away from a musical version of the sit-com The Young Ones. 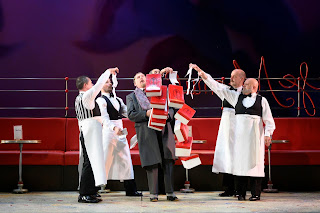 Especially as the other residents join them in their squalid cold surroundings. Philosopher Colline (Emyr Wyn Jones) has return from pawning his books then musician Schaunard (Christopher Nairne) arrives with food and money as he has been paid. They decide to celebrate at a local café. Before they head out the landlord (Jeremy Peaker) arrives for the rent but is brushed off in a similar fashion to the aforementioned Young Ones landlord that Alexei Sayle used to play. 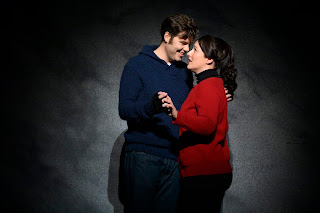 They head off for food leaving the poet behind to write some copy for a publication whose deadline looms.  Neighbour Mimi (Katie Bird) pops around for a light for her candle and they fall in love. (If only it was that simple in real life!) They head down to the café together where the meet up with, amongst others, singer Musetta (Samantha Clarke). The story then follows the relationship of the two lovers – as always, no spoilers here! 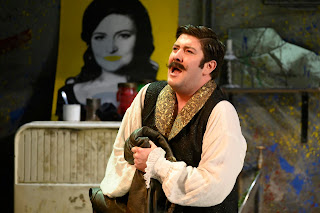 The opera is in 4 acts – though act 1 in the flat quickly rolls into act 2 at the café. After the interval the two acts are separated with a brief break in which the hall lights came on and the audience talked in their seats whilst the set was prepared for the final act. In total the running time was about 2 hours 15 minutes, including the 20 minute interval. 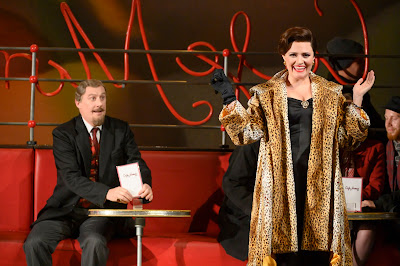 So, what is opera like? There isn’t that big a leap for the audience between watching this and a regular musical. It might be in a foreign language, but it is fairly obvious what’s happening even if you don’t stare at the translation screens all of the time. From the performers point of view you have much larger set of musicians and everyone’s voices are projected naturally as it would have been back in the 1800s. 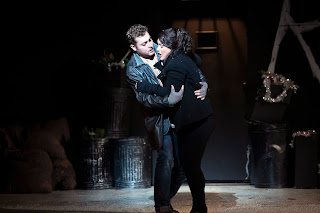 It is really impressive to hear the principal actors singing. The two female leads in particular were awe-inspiring with their fabulous vocal abilities. As I’ve said before, this story is a fairly easy one to follow and the amusing parts are actually funny (or is it just me that wonders why others are laughing in some Shakespeare plays?). Director Phyllida Lloyd has previously been involved in Mamma Mia and that pace and attention to detail is clear in this production too.

This is an interesting night at the theatre. As lovers of music generally, my companion and I had an enjoyable evening with the added bonus of the story on top.