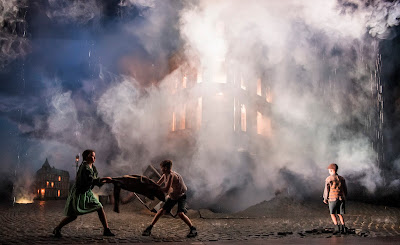 J B Priestley’s classic tale of one evening at an industrialist’s home is a set GCSE text so it was no surprise to see a full auditorium. Many in the audience were likely to be seeing their first performance that was not a pantomime. Director Stephen Daldry lays out an impressive presentation with its fair share of symbolism. Hopefully the youngsters will want to return to see a theatre production soon after seeing the text brought alive this week at Newcastle’s Theatre Royal. 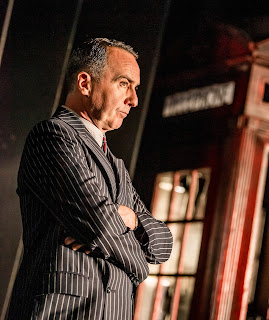 Written at the end of the Second World War and set before the First, An Inspector begins when Inspector Goole calls unexpectedly on the prosperous Birling family home, disrupting their peaceful family dinner party with his investigations into the death of a young woman. 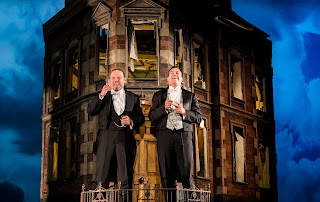 At the party is Gerald Croft (Alasdair Buchan) who is getting engaged to their daughter Sheila (Chloe Orrock). He is the sort of man who always introduces himself with the name of his successful company in a ‘do you know who I am?” style. Sheila has clearly had a privileged upbringing, sheltered from the harshness that life can present as has her brother Eric (Ryan Saunders) who is somewhat “squiffy” at the dinner. Wrapping them both in cotton wool, it seems, is their father Arthur (Jeffrey Harmer) and mother Sybil (Christine Kavanagh) who have worked hard to ascend the ranks in the local community. 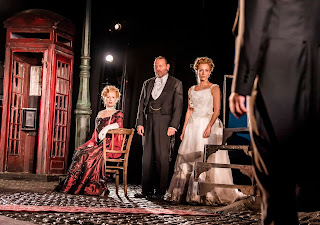 Whilst it rains outside, the raised house on the Ian MacNeil’s set contains the happy family who are full of celebration. They are a family who are enjoying the trappings of success as they follow the domestic rules that apply to such functions at that time.  Then there is a knock at the door. Rick Fisher’s lighting design casting a tall dark shadow on the exterior of the house of Inspector Goole (Liam Brennan) – well I did say the show was full of symbolism. The Inspector tells the gentlemen, as they enjoy their post meal smokes, that there has been a suicide and he needs to make enquiries. Thus, the evening moves with a set of almost Agatha Christie-style revelations. Given some of the audible gasps, it was clear that some of the youngsters in the audience were watching this before studying the book. 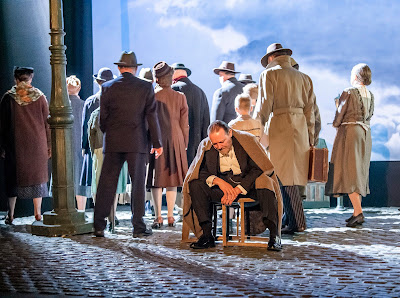 Adding to the atmosphere are some occasional musical interludes written by Stephen Warbeck accompanied by some young actors.  Was this just padding or simply a way to reorganise the actors? 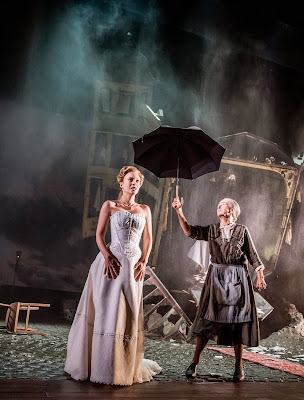 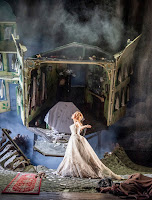 This show runs for 1 hour 45 minutes without an interval and the teenagers around us were clearly entertained for the full duration of the show – it was the adults next to us who kept looking at the phones and chatting like it was a show on TV! Liam Brennan really brought the role of Inspector alive. Christine Kavanagh, Jeffrey Harmer and Alistair Buchan’s characters gave the more adult responses to the situation whereas, initially, Chloe Orrock and Ryan Saunders presented a pair of siblings that showed the immaturity in keeping with their upbringing. The talented cast and Stephen Daldry’s direction keeping each character faithful to the source material. 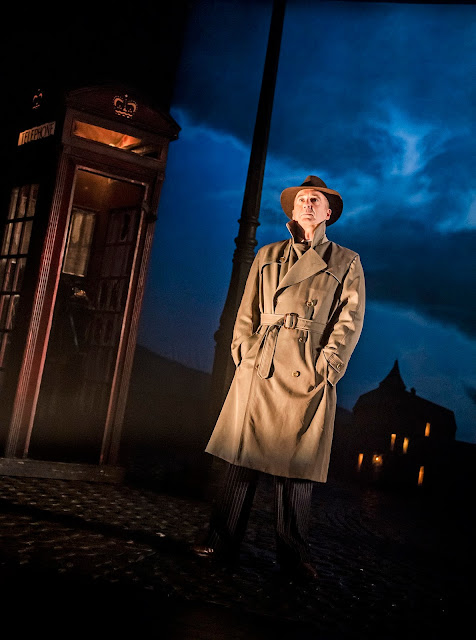 There are a few surprises in the way the show has been produced but were not in the business of revealing any spoilers here. The pace was enough to keep interest going and the result is a rewarding trip to the theatre. As mentioned at the start, hopefully this adaptation will encourage the audience to see that there is more to theatre than panto and they will return.