Frank Wildhorn's musical about a doctor's unethical experiments appears at the Darlington Hippodrome this week, performed by the usually reliable Darlington Operatic Society. 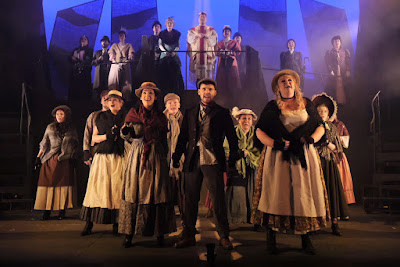 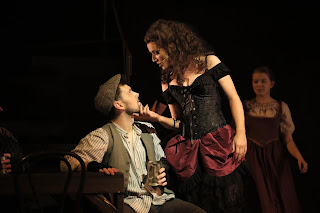 Dr Jekyll is keen to perform experiments to look into manipulating the good and bad halves of the human condition.  When he presented his ideas to the board of the hospital they are rejected on ethical grounds.  Undeterred he decides to continue however he consumes the potions himself rather than using a patient. The result is Mr Hyde who has a very different personality to the compassionate Dr Jekyll. In addition, Dr Jekyll is getting engaged and so he heads off on his stag do. 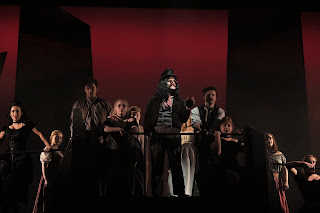 This show does have some strong performances from the three principal actors. Each having a moment to shine with a few solo numbers and duets. Dr Jekyll singing This Is The Moment, Lucy singing Someone Like You and Emma tackling Once Upon A Dream were amongst the highlights. Backing the musical numbers is a large talented orchestra the filled the venue with its sound. The period costumes are glamorous and this helps give the production an appropriate look. 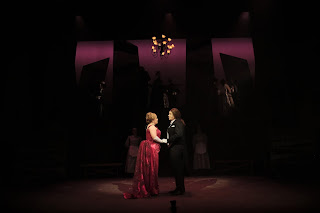 But Jekyll and Hyde is a troubled show and this is down, in the main, to poor writing.  The lyrics were often cliched and would be more in place in a send up of musicals in a fringe show. Horror musicals are a hard sell and this collection of musical ditties did little to change that. After the successes of Priscilla and Spamalot,  it is a shame to see the choice of production rather than the quality of performances being the topic of conversation as we left. If they had wanted to do a horror then Carrie would be our choice, if you wanted to do a send up of the format then the often tongue in cheek Urinetown delivers. But we left not wanting to see another Frank Wildhorn story again. 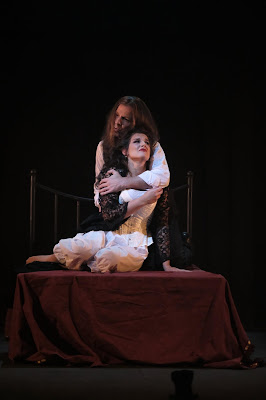 If you’re wondering why the performances are being referred to by the character’s name in this review – the programmes were not available on opening night so we don’t know who the cast or creatives were.
This is a shame as there were some fine performances trying to deliver the mediocre writing.  Jekyll and Hyde is a difficult musical to love I'm afraid. Review by Stephen Oliver

Tickets are on sale now by calling the Ticket Hotline on 01325 244659 or online at www.darlingtonos.org.uk.