Sweet dreams are made of this, who am I to disagree? 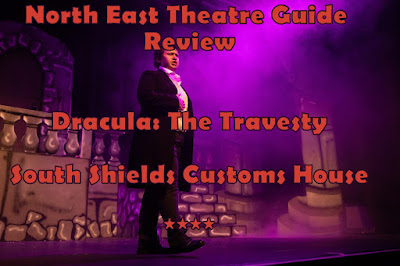 Sick of bad news on television and radio? Need cheering up? So did we and we found the perfect antidote to all the crazy stuff that is happening at The Customs House this week. I haven’t laughed so much in ages and wee-man has suggested it will be at the top of his “funniest show of the year” list by the end of December. Plus, at £12 for a full price ticket – it doesn’t does the Earth.

The show begins with Ray Spencer, Davey Hopper and Sophia Catleugh on stage cracking jokes from the off. Whilst the show reunites panto double act Ray and Davey, it sees them both being funny in different ways to the regular end of year panto. However, their on stage chemistry works well on this show too. Fitting in well to the mix is Sophia, who must be from Peterlee given the number of swipes the poor place takes during the show’s two hour run. Indeed, the three actors work well as an ensemble.

But ‘is it a panto?’, you may ask. Good question. A quick check of the definitive guide “It’s Behind You! – The Story of Panto” by Peter Lathan suggests we will have laughs, audience participation and a girl dressed up as a boy and an evil baddie. Yes – this show has all of that. Perhaps this story follows the source material closer than a regular panto show. 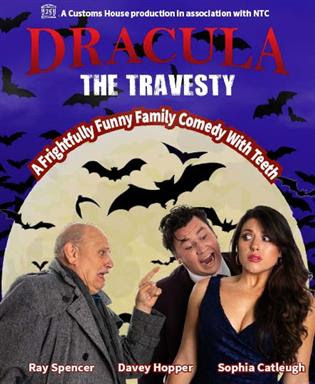 The show is pretty physical at times.  Poor Davey takes a number of tumbles and even Ray fell over at one point (though that might not have been in the original plan!) Is it suitable for families? Sure – despite the horror source, this isn’t scary and even the one bloody scene had everyone laughing (was the audience member a plant? Will she get the blood out of her top?)

This show does have a story… Dracula has landed and our brave team chase him out of England and back across the channel to his castle to stop him having tasty snacks of human blood.

A quick change of clothes and we have a quick change of character – from Dracula’s side kick to Dutch tulip seller, from a vampire hunter to the vampire himself or from dear Lucy to Scottish doctor in an instant. Well almost an instant – but that’s part of the comedy as Davey appears with odd socks and no shoes at one point.

Dracula: The Travesty, written by Stewart Howson, was originally commissioned by Northumberland Theatre Company NTC in 2016. It has had a number of outings since then but this is the first time we have caught up with it. It was well worth the trip across to Shields.

We are going to declare it our first panto of the season (as it runs into November) and we are happy to announce that it is the best panto we have seen this season – so far. I know, dear reader what you’re thinking – but as we left the Customs House last night the conversation quickly turned to “will we see anything as funny as this during the rest of the season?” If we do, then panto is in rude health this year.