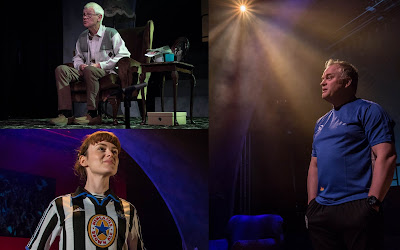 Bobby was a working-class lad who started life as a coal miner. Success never resulted in him forgetting his roots and people speak about him being a gentleman who conducted himself with passion and dignity. You don't seem to get many like that in football today.  No wonder it feels appropriate to put his legacy on stage.  This is a story about those whom he influenced rather than having an actor acting his life story. 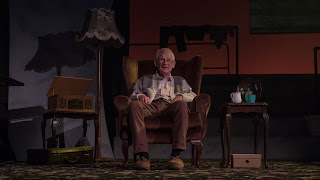 The stage is split into three homes. Donald McBride is Tommy, the man who knew Bobby when they were growing up in Langley Park, County Durham. He knew Bobby's parents and he was pleased when he signed for his first professional club. The both knew about outside toilets and a lack of running water in the houses that they grew up in. Such recollections produced a number of early laughs for the Customs House audience. 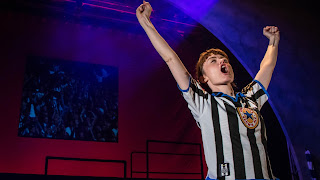 Sam Neale appears as Clair, a single mum with a young child that we never see, remembered going to St James Park with her grandfather. She starts her piece waxing lyrically about when Ruud Gullet resigned, with Newcastle looking ready for the drop, but Bobby sailed into town and the team beat Sheffield Wednesday 8-0. 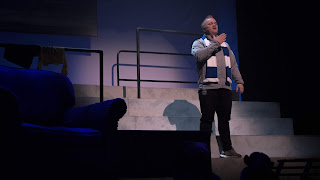 The former professional footballer, Mark, who has retired through injury, but met Bobby on his travels, is played by Charlie Richmond.

The three actors alternate telling their accounts of the footballing legend, only reaching a common focus as England play West Germany in Italia 90's semi-final. Apart from that the only interaction was the footballer, Mark, picking up a scarf previously put out to dry by the mother Clair. 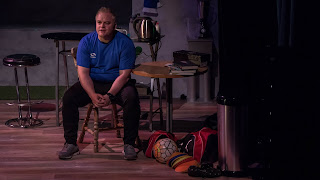 Tom Kelly's gentle humour in the script fed Donald McBride plenty of laughs throughout his performance. Whilst Charlie's Mark has much more of an emotional rollercoaster, yet he still gets to make everyone laugh on occasions. Both actors come across as naturally funny raconteurs who can deliver tough points when the time comes. 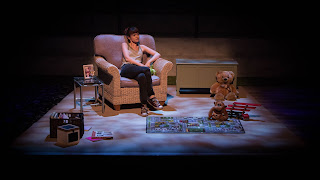 Mark’s story has similar dark moments to poor Clair. This poor lady seemed to have pulled the short straw in life. Sam Neale is able to capture a strong parent that survives no matter what is thrown at her and her child.

Director Jamie Brown allows the three talented actors to shine in their respective thirds of the set. The passion that supporters feel for the beautiful game is conveyed with the same emotion as the feelings towards the popular footballing hero. 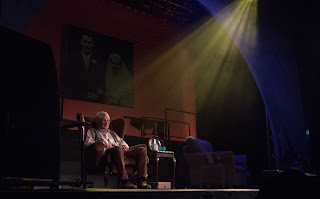 This is a show that will go down well with football fans, especially those who follow Ipswich and Newcastle.  There are human stories and Bobby’s connection with cancer research feature too. How much the story will appeal to those with only a passing interest in the game is debatable. Perhaps with some interaction between the characters, at some point, then the story could have a wider appeal.

Sir Bobby Robson is clearly loved by everyone involved in bringing the show to life. It went down very well on opening night with a standing ovation. This gentleman is rightly held in high esteem and this show is a fitting tribute to his life and his principles.

Tickets:
Bobby Robson Saved My Life runs from Tuesday, July 16, to Saturday, July 20, at The Customs House, before moving on to the Regent Theatre in Ipswich, where Sir Bobby enjoyed great success with Ipswich Town, and Newcastle’s Tyne Theatre and Opera House.
The Customs House performances start at 7.30pm, with a 2.30pm Wednesday and Saturday matinee. Tickets, priced from £20, are available from the box office on (0191) 454 1234 or online at www.customshouse.co.uk.

Tickets for the Newcastle Tyne Theatre & Opera House shows are also on general sale now.
Tickets will be available from the Tyne Theatre and online from Eventim tickets – LINK: http://bit.ly/BobbyRobsonSML  #Ad
Posted by North East Theatre Guide at 00:11