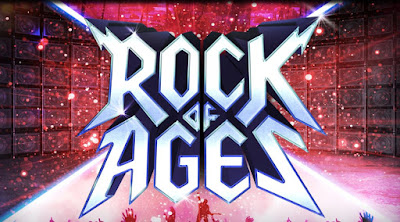 The jukebox musical Rock of Ages that celebrates 80s hair metal returns to the Sunderland Empire this week. 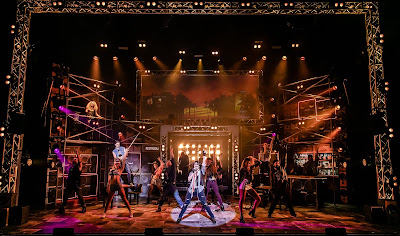 It is 20 years since the North East’s temple of playing the air guitar, The Mayfair, closed in Newcastle. The fans of the likes of Bon Jovi, Twister Sister, Journey, Poison, Europe, Survivor and Whitesnake et al will like the choice of music for this show.  Rock of Ages has been toured extensively around the world since 2005 which suggests I’m not alone in still listening to the music. I may also be unusual in actually liking the 2012 film.  So, with these disclaimers I was pleased to see the show return to the North East. 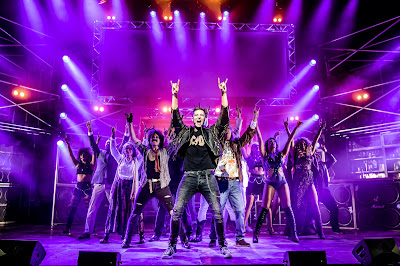 The tale follows a familiar line: the girl from the small town, Sherrie (Jodie Steele) goes to the big city to seek her dreams, in this case: to be an actress. When she arrives, she discovers it is a place full of crime and she gets her bag stolen. Anyone familiar with Thoroughly Modern Millie will know the story so far. The location is the Sunset Strip in Los Angeles. In real life, during the 80s and early 90s, the clubs along this part of the Sunset Boulevard were able to cultivate bands like Motley Crue and WASP. Its notoriety was recorded in the 1988 movie The Decline of Western Civilization Part II: The Metal Years. Sorry, I digress. Back to the musical… 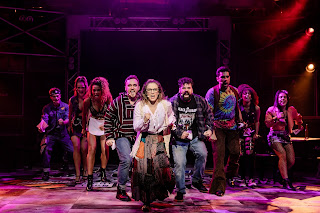 In Rock Of Ages the action centres around the fictious Bourbon Room, which is under threat of demolition thanks to the Mayor (Adam Strong) taking back handers from German redevelopers Hertz (Vas Constanti) and his son Franz (Andrew Carthy), and the strip club Venus next door. The Bourbon Room is owned by Dennis (Kevin Kennedy) assisted by the narrator Lonny (Lucas Rush). Staff at both venues have dreams, and we are introduced to Drew (Luke Walsh) who dreams of being a rock star but currently cleans the rock club’s toilets.

As Lonny points out: we need a love story, and running parallel to the story of the club's redevelopment is the friendship between Sherrie and Drew. After being attacked by a passing stranger, Drew finds the distressed Sherrie on the strip and he helps her get work at the club.

The audience are also introduced to rock star Stacee Jaxx (Kevin Clifton) who plans to acrimoniously leave his band Arsenal after one final fund-raising show at the Bourbon Room. 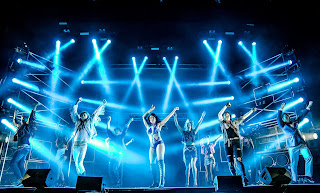 This production feels very different to the tour 5 years ago. Lucas Rush is more successful at breaking the fourth wall and involving the audience in a rock and roll pantomime. Lucas makes references from time to time to the format of a Broadway musical, especially at the end of Act 1 when introducing the final number and accompanying jazz hands.

Some of the band are on stage (the bass player obviously didn’t like the limelight) and the kept appearing from behind a curtain that opens and closes at random times, sometimes mid-song. There was an attempt to turn the show into a gig and to get the audience involved in clapping along. 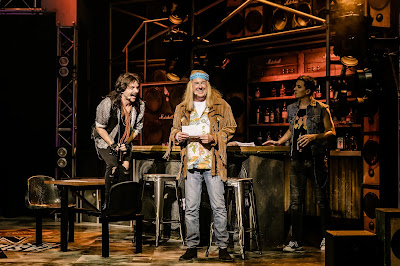 As with any jukebox musical, the audience pay their money to hear familiar songs and, for a generation that remember Tommy Vance’s Friday Rock Show on Radio 1, there were plenty of Glam Metal classics from Rhiannon Chesterman’s version of Twisted Sisters’ We're Not Gonna Take It through to the romantic duet from Kevin Kennedy and Lucas Rush as they sang REO Speedwagon’s Can’t Fight This Feeling. The stand-out vocal performance, for me, came from Darlington’s Pop Idol Zoe Birkett. Appearing as strip club owner Justice, Zoe’s voice really lifted the songs that she was involved in without having to scream. The show finishes Journey’s Don’t Stop Believing which had the Empire audience on their feet joining in. 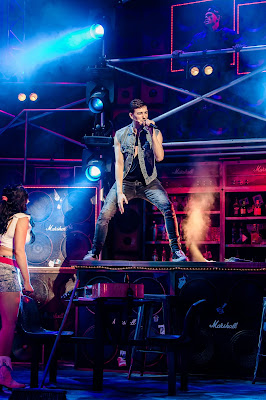 The direction and choreography from Nick Winston has created a show with a different impression to how I remember the last tour. There is much more tongue-in-cheek comedy and references to both the musical format and the film. The debauchery leaves little to the imagination and I don’t believe Nazi salutes constitutes comedy in 2019. The dancing is great and the ensemble cast work really well together to keep the stage busy during the big songs. Morgan Large’s set and Ben Cracknell’s lighting design does give the feeling of a big concert rather than a smoky club with sticky floors.

I left the show wishing they had not demolished The Mayfair. I still listen to the music and remember those gigs well. If only I had a time machine!