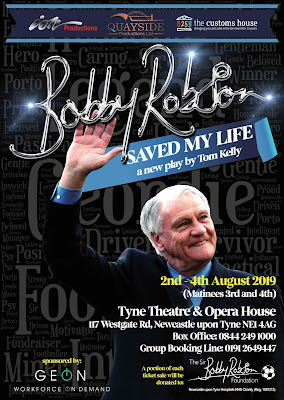 The play, written by Jarrow-born poet and playwright Tom Kelly, focuses on the late Sir Bobby’s legacy and explores the ability of one person to have a dramatic effect on the life of another, without ever knowing it.

Focusing on three very different individuals and the ups and downs life throws at them, it promises to be a heart-warming, inspirational and uplifting piece that celebrates not only Sir Bobby’s life, but the impact he had on so many.

Charlie Richmond, Director of Newcastle-based Quayside Productions, explained “Quayside Productions are delighted to be co-producing Bobby Robson Saved My Life alongside Ion Productions and The Customs House. Our mission is to develop ideas and produce opportunities in the North East. Just like Sir Bobby, we want to create a lasting legacy that will inspire generations for years to come.  As an actor often known for my comedy roles within Panto at the Tyne Theatre I’m excited to explore my more serious side as the character Mark in Bobby Robson Saved My Life.”

Gareth Hunter, of Ion Productions in South Shields added “We are delighted to have teamed up with both The Customs House and Quayside Productions to bring what we all believe to be a fantastic piece of theatre that celebrates not only Sir Bobby, but the human spirit and the legacy we can all leave behind.  This link between the three companies will allow us to bring not only a great piece of theatre to The Customs House and Tyne Theatre, but also act as a springboard for the national tour next year.”

Joanne Johnson, Director of Tyne Theatre & Opera House said: “I’m thrilled that the team behind ‘Bobby Robson Saved My Life’ have chosen to bring the play to our stage, as it’s an honour to be part of something that celebrates a local legend whilst supporting local production companies like Quayside and Ion. We’ve previously teamed up with The Customs House to bring Geordie The Musical to the Tyne Theatre stage, so it’s wonderful to link up with them again.”

As part of the play’s development, people are being asked to upload a video to social media, of themselves describing Sir Bobby in three words, using the hashtag #3wordsforBobby. A number of famous faces have already done so.

Sir Bobby, who was born in Sacriston, County Durham, and played for Fulham, West Bromwich Albion and England, going on to also manage the national team, died in July 2009, aged 76, after a long battle with cancer.

Tickets are on general sale now.
Tickets will be available from the theatre and online from Eventim tickets – LINK: http://bit.ly/BobbyRobsonSML #Ad
Posted by North East Theatre Guide at 22:01