Hair – The Musical
Sunderland Empire
Until Saturday 11th May 2019 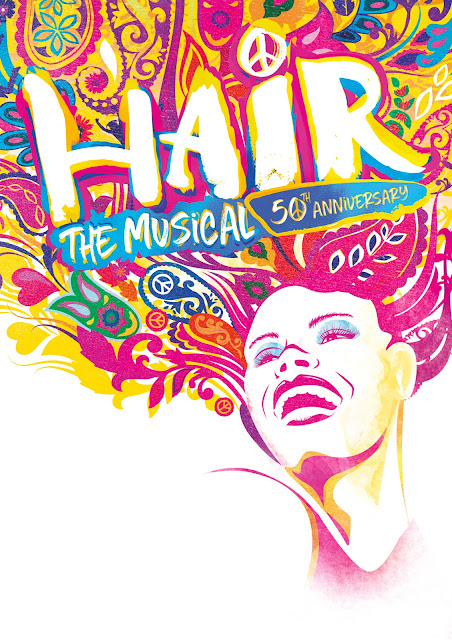 Hair is at the Sunderland Empire this week on its 50th anniversary tour of the UK. Full of hippy charm and late 60s attitude, this show will appeal to some.  The ensemble cast were 100% committed to the production and their warmth was felt by the second act. 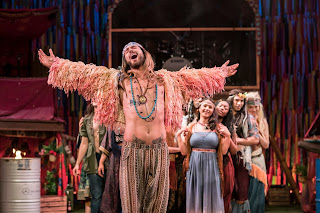 I remember reading Tom Wolfe’s Kool Aid Acid Test about a hippy’s journey in the late 60s and, to be honest,  I couldn't make sense of some of it due to the hallucinogenic rambling and contemporary language. I'm not a summer of love 60s child. This tale of dropping out and dodging the draft to Vietnam left me in a similar state, particularly at the interval. The show was shocking back then, perhaps it still has that power now - only different things may shock.  The racism is perhaps more disturbing than the swearing, nudity, drug use, casual relationships or use of a flag nowadays.
The show starts with introductions and far out tales, some of the cast breaking the fourth wall to talk direct to the audience. This extended set of "who am I"s across the ensemble feel like the opening to a classic pantomime. Eventually we trip into their dreams and sub-consciousness. The reality often blurring at the edges. 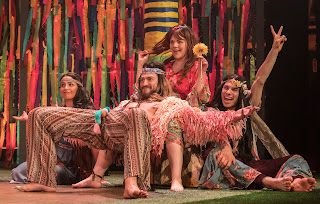 The live band are up on the stage. Three of them on festival style platforms. It was a really tight band, under Musical Director Gareth Bretherton, and the music was generally a high point for me.
The rest of the set is surrounded by colourful strips that came into their own when the UV lamps were switched on in at 2. 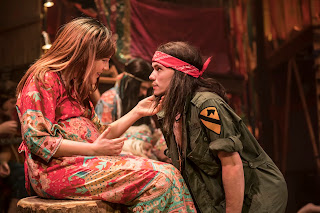 Act 2 was less bewildering.  As Claude (Paul WIlkins) makes decisions whether or not to continue to drop out or join the army. At least now the hallucinations were clearly marked as such.
There were some real highlights in the score, with 3 great songs from my childhood, Aquarius in act 1 and Good Morning Starshine and Let The Sun Shine In in act 2 standing out.  The choreography, from William Whelton, and movement of the cast was interesting. 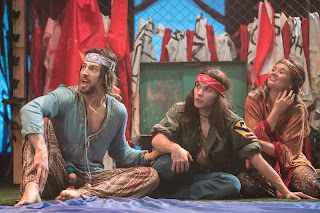 But, as nice as the cast were, did I like or identify with the characters? Probably not.  It left me thinking: how will people react to something like Irving Welsh's Trainspotting in 30 years time?
I wanted to see Hair. I read a number of accounts about it over the years. In that respect I'm glad I did. Now can I recommend it? It isn't universal. It still has an audience but you'll only find out if you see it I guess.
Review by Stephen Oliver
Photos: Johan Persson

Tickets: Tickets are available from the theatre box office and online from ATG Tickets: http://bit.ly/HAIRSundrlnd #Ad