New Gateshead Panto is a (Whitting)ton of fun!

It’s a busy time for most people in the run up to Christmas, myself included. So much so, that for this review, I ended up attending a school’s performance. This is Bluebell Theatre Production’s first Panto in Gateshead following previous stints at Stanley’s Alun Armstrong Theatre and my first time seeing this company’s work. A school’s performance is a great indication whether a Panto is successful or not because if they like it, the room will be alight with screams and if they don’t like it, the room will be alight with murmurs. This became a big influence in this review. 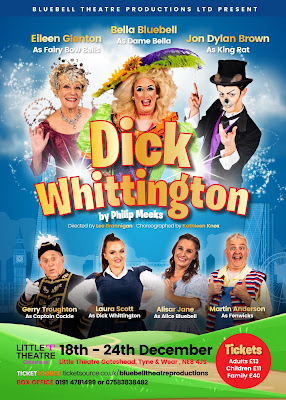 The story of Dick Whittington is a one that is done less frequently than other subject matters. This particular story starts in London town with the introduction of King Rat (Jon Dylan Brown), who declares his ambition to take over London with his rat army. His speech is interrupted by Fairy Bow Bells (Eileen Glenton) with the news that King Rat faces an unlikely hero Dick Whittington (Laura Scott), who is destined to take the title of Lord Mayor of London. Bow Bells acts as the facilitator of the action, gifting Dick a cat named Tommy (played by Daniel Burlison at this performance).
As the story evolves, we’re introduced to Dame Bella Bluebell (Lee Brannigan) owner of the Bella store chain and her daughter Alice (Alisar Jane), who longs to go on adventure against her mother’s will. Along with the unrequited idiot Fenwicks (Martin Anderson) and wrongly hired Captain Cockle (Gerry Troughton), Dame Bella is about to set sail for the distant land of “Whitley Bay” to find the Spanish City, and hires Dick and Tommy to look after the shop and Alice while they’re away, sparking the love story between the characters.

The rest of the plot follows the tradition route of Dick being framed by King Rat and banished from London, leaving Bow Bells to aid the hero. A change of the story is that instead of Dick being a stowaway, Bella invites Dick back to work for her on the ship. The stowaway role is replaced by Alice at the top of Act 2, who joins the crew unsubtly. The rest of Act 2 includes most of the traditional plot points to create a very solid, family-friendly story.

This show has made a very good first impression. Director and Producer Lee Brannigan has crafted together a very polished show that encompasses a good story with good comedy and production values for a small theatre space. Whilst a few of the jokes feel slightly dated for the young audience, Phillip Meeks’ has written a very robust, Geordie script which is entertains the audience without compromising the plot line.

The cast for this show also makes a good impression. Laura Scott, as Dick Whittington, is very strong in the traditional style of the Principal Boy. She delivers a good quality vocal performance and shows real stage presence. Scott’s chemistry is equally strong with Alisar Jane, who is comfortable in her role of Principal Girl Alice.

Elsewhere, Jon Dylan Brown is delightfully camp and cruel as King Rat with just the right level of evil to get a bombardment of boos heading his direction whilst Eileen Glenson, as the Fairy Bow Bells, is equally as camp delivering vintage vocal tones with ease with a vibrato to die for.
Also Gerry Troughton and Martin Anderson expertly deliver the comedy as Captain Cockle and Fenwicks respectively, with Anderson winning the audience’s approval with a very wordy present skit in Act 1. 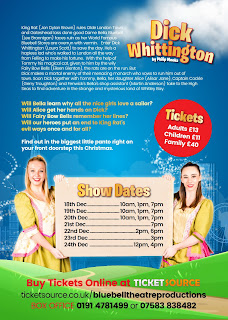 It goes without saying the star vehicle of Bella Bluebird steals this show. Lee Brannigan combines the absent lead comic role with his dame to form that chatty best friend or auntie figure which the audience receive very well along with his soft toned voice and juxtaposed hearty vocals. Brannigan is a very glamourous dame with some amazing outfits designed by Alan Graham but doesn’t verge into the realm of female impersonation, staying true to the art form of the dame.

Also, Daniel Burlison deserves a special mention for his sassy portrayal of Tommy the Cat. His stage presence match the level of his professional counterparts and was excellent in communicating his performance without speaking.

Musically, there is a lovely mix of current pop tunes, musical theatre songs and some old classics which caters for the family audience, Scott and Brannigan getting the majority share of songs to showcase their vocal abilities. The choreography is equally as a diverse supplied by 3 principal dancers and 8 junior dancers from Kathleen Knox’s Dance School. Hats off to the Red team who impressed with some high quality acrobatic tricks.

With this year’s run almost over and advertisement focus shifting to next year’s show “Sleeping Beauty”, Bluebell Theatre Productions have delivered a family-friendly, upbeat, traditional Pantomime that puts the story at the heart of the show.