Darlington’s Panto Is A Flying Success 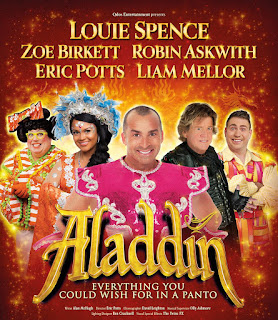 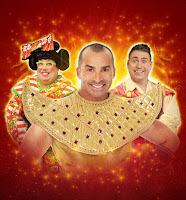 Some pantos are spectacular.  Some are full of great singing moments. Darlington's panto is loaded with great laughs and sparkles. Louie Spence comes across as the ‘Spirit of Innuendo’ and, with Eric Potts as dame and comic Liam Mellor, the audience were laughing throughout the show.

First up is Robin Askwith as evil mastermind Abanazar. After setting his dastardly master plan for world domination he seeks assistance from the Slave of the Ring. With a huge twirl Louie Spence stamps his mark on the show. Funny for the parents, I'm sure some of his quips were flying over the heads of the younger audience members.  At times he probably over-stepped the mark.
Aladdin has all of the QDOS Pantomime’s hallmarks of success: a cast that understands the elements of a great panto and some of the wow factor.  Opening number "Darlo" to the tune of Downtown is the start of many local references.  The well worked song is the first to feature the enthusiastic dancers, made up of both professionals and younger "babes" from Joanne Banks Dancers.  The show also features a live band under Musical Director Chris Pugh. As we’ve always said, live music performances are far preferable to a recording.
Then come the introductions of the remaining principal cast members. This is done efficiently - other shows can make this drag on sometimes. In fact, with Eric Potts as both dame and director, the show canters along at a good pace and finished tonight at 2 hours including interval - ideal for the youngsters. The exposition is economical, funny scenes abound, but the show is selective in what they use. Aladdin is more 'pantos greatest hits' rather than the 'complete box set'. No take off or messy scenes here but we do have a fabulous tongue twister scene. Even Baby Shark is cut to 2 lines (phew!) Liam Mellor has settled in in his second year as Darlo's comic. The kids respond well to him and want to be in his gang. Special mention goes the 3 year-old Thomas for his star performance during the community singing on the triangle - a future star in the making. 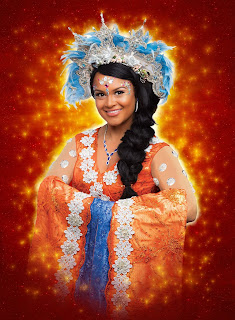 Zoe Birkett has made regular appearances in the North East with various musicals and she has the opportunity to show off her singing talents here too. There are not many songs here, hence the 2 hour running time, but it was good to hear some recent music rather than the usual pot boilers. Zoe sparkles as Princess Jasmine, confirming that she can act as well as sing. Carl Douglas is the Princess's love interest Aladdin. Being the chosen one, he gets to feature in the shows big show stopping event... the magic carpet ride. QDOS have pulled the stops out to produce a great ending to Act One. The Twins FX have helped Aladdin to fly over the orchestra pit without it being obvious in the stalls how it was done. All good pantos need these magical moments. The only let down was the huge Genie puppet. It was the height of the stage but had more than a passing nod to Disney.  It's a shame the lips were badly out of sync.  Having said that, this is the first panto I have been to this season that hasn’t suffered from some sound issues at some point.
Aladdin is magical and funny. Darlington has a wonderful panto on its door step that means that the locals don't need to venture far for a great Christmas treat. Review by Stephen Oliver.

Tickets:
Aladdin flies into Darlington Hippodrome from Saturday 8 December 2018 to Sunday 6 January 2019. For full details and to book visit www.darlingtonhippodrome.co.uk or call 01325 405405.
Posted by North East Theatre Guide at 22:41