The South Tyneside Comedy Festival is returning to The Customs House for a massive fourth year – and the first show is already selling fast.

Festival director Jason Cook will join Carl Hutchinson for a ‘free-wheeling evening of comedy chaos, totally unplanned and totally unscripted’ on Saturday 13 July. The pair are also promising a fair bit of Hebburn/Jarrow rivalry in Cook and Hutchinson Have Literally No Plans Whatsoever.

Cook’s previous unscripted shows with South Shields comedians Chris Ramsey and Sarah Millican and last year’s South Tyneside Comedy Festival headliner, Johnny Vegas, have gone down an absolute storm in the past.  Cook and Hutchinson’s show is the first to go on sale, with the full programme for the South Tyneside Comedy Festival 2019, which runs throughout July and August, still taking shape.

Cook said: “I can't wait for people to see who we've booked for the South Tyneside Comedy Festival 2019. Every year has gotten better and better, with bigger and bigger names coming to see what a perfect venue we have in The Customs House.  It's now become part of the comedy calendar and I'm getting inundated with requests to join us, although I only pick the very best - we don't just let anyone do our gig!”

Hebburn-born Cook’s career in stand-up started in 2005 and he is now a highly sought-after comedian and writer, whose television credits include Hebburn, Murder on the Blackpool Express and most recently, Death on the Tyne.  He is a Fellow of The Customs House Academy and brings Jason Cook’s Comedy Club to The Customs House every month, the popularity of which led to the launch of the South Tyneside Comedy Festival in 2016. 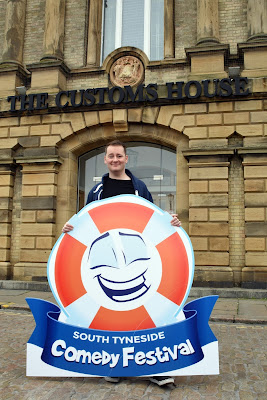 Hutchinson, from Jarrow, has been crowned the Magners Pub Comedian of the Year and the winner of the Beat the Frog World Series competition. He also reached the final of the annual stand-up competition for new acts, So You Think You’re Funny? in 2007.  His debut Edinburgh Fringe Festival show, Acceptable? made the Top 10 shows of the Amused Moose Laughter Awards 2012 and in 2010, he starred in ITV’s FHM Comedy Hero and was part of Just the Tonic’s Big Value Edinburgh Showcase in 2011.

Over the last two years, Carl has appeared on Stand Up Central, supported sell out tours with WWE Legend Mick Foley on his UK tour and Chris Ramsey on his tours The Most Dangerous Man on Saturday Morning Television and most recently, Chris Ramsey Live 2018: The Just Happy To Get Out of the House Tour.

Tickets for Cook and Hutchinson Have Literally No Plans Whatsoever are priced from £10 and available from the box office on (0191) 454 1234 or online at www.customshouse.co.uk. The recommended age is 16-plus.
Posted by North East Theatre Guide at 18:27