Preview: Red is the New Blue at Live Theatre


Is there life on Mars? 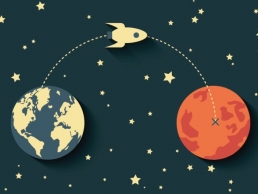 On Tuesday 23rd and Wednesday 24th Juneat 7.30pm Live Theatre will be presenting Red is the New Bluea out of this world show that has been created as part of Live Theatre’s Live Lab programme, which aims to develop new talent and give theatre makers a forum to try out new material and gain insightful feedback.
Set in 2029 Red is the New Blue follows the antics of three ordinary people who are sent to Mars, by Stargaze Incorporated, for a reality TV show like no other. The crew are left alone, abandoned on Mars forever, and it doesn’t take long before the cracks begin to show. The production has been created and will be performed by three emerging theatre makers who have all been awarded Live Lab Associate Artist status. These are spoken word artists Rowan McCabe, Matt Miller and Matilda Neill (who is also one of the members of Live Theatre’s all female sketch group Your Aunt Fanny).
In January 2015, Live Theatre re-launched its Live Lab programme creating more opportunities for budding writers, theatre makers and audience members to get involved. As part of this re-launch Live Lab announced their new Live Lab Associate Artists scheme. The inaugural Live Lab Associate Artists include the three spoken word artists involved in Red is the New Blue and theatre director Anna Ryder, who recently co-directed Rendezvous with Clive Judd at Live Theatre.
The Live Lab Associate Artists receive mentorship from Live Theatre’s literary team as well as career support and talent development.
As Gez Casey, Live Theatre’s literary manager, explains: “Following the successful Live Lab re-launch earlier in the year, we’re delighted that the collaborative project with three of our Live Lab Associate Artists is going to premiere in the Studio Theatre this June."
This is the first time that Rowan, Matt and Matilda have worked together to create a show. Matt Miller said: "Red is the New Blue initially took the upcoming Mars One space mission as an impetus and asks questions like 'Why would anybody want to go to Mars forever?' and 'What would happen to those individuals? What about our society? Will our voyeurism be fulfilled?' as well as 'What actually is there to do on a spaceship?' It has poignancy. It has poetry. It has tongue in cheek humour. Cos when you're going to Mars forever, really, you've got to be able to laugh about it, don't you?"

The show fuses together theatre, spoken word and film elements and offers a funny, moving and thought-provoking night out whilst asking audiences what they would do if they found themselves stuck on Mars forever?
Tickets:
Red is the New Blue appears at Newcastle’s Live Theatre on Tuesday 23rd and Wednesday 24thJune 2015, 7.30pm