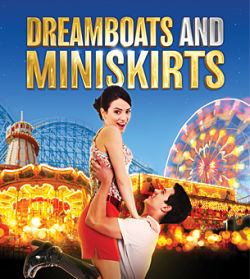 It is the sequel to Dreamboats And Petticoats,which premiered in Bromley in 2009, and became a musical phenomenon having played to more than two million people across the UK. Inspired by Universal’s multi-million selling album series which now boasts seven double compilation albums and a myriad of one off special releases!
It’s 1963 and the Petticoats gang are growing up and facing new challenges. Bobby and Laura’s first single, Dreamboats and Petticoats, went to the top of the charts, but they haven’t been able to repeat that success with any further records. Norman and Sue have settled down to non-marital bliss – and a baby! And Ray and Donna seem blissfully happy in their professional lives… but are they really?
The advent of the Beatles and the Merseyside sound is inspirational. But will it inspire Bobby and Laura to have one more shot at stardom, Norman to “get off the drains” and find that hit parade voice he has longed for, and Ray to realise his ambition and manage a really top pop act?
All will be revealed in a follow up with the same wit, charm, and great songs as Dreamboats and Petticoats.
Dreamboats and Miniskirts is written by Laurence Marks and Maurice Gran, the team behind Goodnight Sweetheart, Birds of a Feather, The New Statesman, Shine on Harvey Moon, Save the Last Dance For Me and of course, Dreamboats and Petticoats, and is produced by Bill Kenwrightand Laurie Mansfield in association with Universal Music.
Featuring hit after hit from Twist & Shout to Handy Manto Pretty Woman, One Fine Day and many more, Dreamboats and Miniskirts is happiness guaranteed.
North East Theatre Guide Review from earlier in the tour: Dreamboats and Miniskirts Review
Tickets:
Tickets available in person at the Box Office on High Street West, from the Ticket Centre on 0844 871 3022* or online at www.ATGtickets.com/Sunderland
*Booking fees may apply to telephone and online bookings.
On Tour
23-27 Jun 2015 - Grand Theatre, Wolverhampton
29 Jun-4 Jul 2015 - Everyman Theatre, Cheltenham
6-11 Jul 2015 - Cliffs Pavilion, Southend
13-18 Jul 2015 -The Grand Theatre, Leeds
21-25 Jul 2015 - The Marlowe Theatre, Canterbury
27 Jul-1 Aug 2015 - Hippodrome Theatre, Bristol
3-8 Aug 2015 - Kings Theatre, Southsea
10-15 Aug 2015- Kings Theatre, Glasgow
18-22 Aug 2015 - His Majesty’s Theatre, Aberdeen
24-29 Aug 2015 - Empire Theatre, Liverpool
7-12 Sep 2015 - Mold Clwyd Theatre, Cymru
14-19 Sep 2015 - Grand Theatre, Swansea
21-26 Sep 2015 - Grand Theatre, Blackpool
28 Sep-3 Oct 2015 - Swan Theatre, High Wycombe
5-10 Oct 2015 - Churchill Theatre, Bromley
12-17 Oct 2015 - Corn Exchange, Kings Lynn
26-31 Oct 2015 – Sunderland Empire, Sunderland
Posted by North East Theatre Guide at 11:54