Preview: The Bugle Boy is back on tour

Bugle Boy the Musical is Back for a 2014 Tour

The Smash Hit show 'BUGLE BOY - THE LIFE STORY OF GLENN MILLER' will be hitting theatres all around the country on an extensive tour from 22nd May 2014 - 9th November 2014. We have listed the tour dates at the end of this blog.
We had the pleasure of seeing last years tour at Darlington's Civic Theatre and this is what we said: 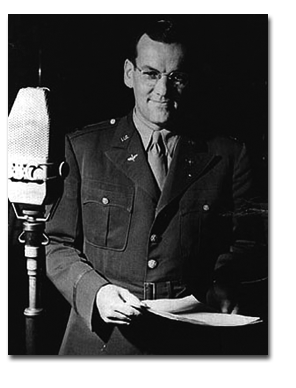 "Den Stevenson has written the book for this Glenn Miller musical as a result of working along side Glenn’s youngest brother Herb Miller and booking for the Herb Miller Orchestra. It results in an accurate portrayal of a musical legend whose music is still played on a regular basis nearly 70 years after his death.
The curtain is raised with the 16 piece band playing “Moonlight Serenade”. This band are one of the highlights of the show and hearing live musicians playing the familiar tunes helps engage the audience throughout the production.  We then see a radio interview between Larry Bronx (Daniel Page), who had a successful radio show with 20 million listeners and helped project the Miller name across the states, and Miller’s wife Helen (Yildiz Hussein). This first scene sets out the dual intentions of the musical: to celebrate both the musical genius and the love story that enabled it to flourish.
The musical has two distinctive halves: firstly the pre-war development of the Glenn Miller sound and finally the war years. Glenn Miller is played by Michael Storrs who explores the clear frustrations in finding his unique sound and setting up a band that constantly toured across the states.  Eventually he hits it lucky after a musician fails to turn up for a show and he has to re-organise the arrangement.  This is followed by an opportunity for a residency and a place on Larry Bronx’s radio show. Unfortunately after spending nearly 20 years finding the sound, events in Europe and then at Pearl Harbour would quickly change life for the Miller family.

The talented band are on the stage and are led by musical director Simon Lambert. Nick Pugh is on Bass and Haydn Callow on drums. There is also an impressive array of trumpets, trombones and sax. They enable the audience to understand the phases that the Miller sound went through in his formative years. Whilst the show lacks major set changes, the beautiful engaging sound of the band ensures pace is maintained for the show through each scene. There is no shortage of music, with 16 numbers in the first half alone.
A star of the second half is Maddie Cole who is acting a number of parts, providing the female harmonies to several numbers and playing the saxophone in the others. Her big moment, singing “White Cliffs of Dover” solo brought many a tear to the eyes of the audience as it notes a black moment in European history.
Glenn, who by this point is 38, was above the 35 year old limit to join the forces but he wrote to an army friend after rejections and was able to secure a place in the forces which would eventually see him playing with a much larger band in Europe. Unfortunately Michael has to utter a line in Den Stevenson’s script that was to cause a reaction from the audience – effectively ‘Hitler has been on the run since our boys got involved.’ Possibly that was the contemporary view in the States but it’s not a popular idea on a Thursday afternoon in County Durham!
The time flew by and we are quickly brought to the premature conclusion as a result of the flight to Paris in which Miller went missing at the age of just 40.  The show is carried by a fabulous Glenn Miller soundtrack and the wonderful skills of the musicians and singers."