Welcome back Alphabetti!
Alphabetti Soup
Newcastle Alphabetti Theatre
Saturday 2nd September 2017.
We have to admit it. We have missed the Alphabetti Theatre. It was a really nice, safe place to watch an eclectic mix of theatre, music and comedy. So what of the new venue? It is wonderful. It is safe. It is a little bit bigger. It has the potential to really grow. The theatre space reminds us of the Southwark Playhouse or Hull Truck in its Spring Street prime. As we took our seats we knew we would witness special things happening here in the months ahead. We just didn’t expect it all to happen tonight.
Now don’t get us wrong. This venue isn’t perfect. Like every great fringe venue, it has its little idiosyncratic nuances. A trip to the toilets will show that - a few more signs are needed. No, this place has energy in the place of perfect. And good things will happen here.
Tonight was the Alphabetti Soup variety night that we first witnessed in the upstairs room at the Dog & Parrot. The mix of performers that, somehow, combines into a greater whole. We never got around  to the soup on that first night either. But like that first show - the rest of the offering was a canny substitute.
The venue has the seating on 3 sides and the stage area in the middle. This leads to an intimate performance. Theatre Impresario Ali Pritchard was our host for the night with the lovable pooch Sir Rexalot. After the introductions tonight was opened up with the sublime musician Diji Solanke. His mix of covers and original music helped set up the atmosphere for the evening. He is right to sing about getting paid rather than working for just exposure. It is good to note that this venue pays its performers.
The purpose of Alphabetti was to give new creatives a chance and from that very first show we had a short theatre sketch from a new writer with young actors. Tonight was no exception as The Streets, written by Donald Falconer and directed by Jonny Bussell was showcased. In a short sketch, we were asked to consider homelessness, substance abuse and religion.  There was clearly potential for the ideas to be worked up into a larger piece. The 3 actors themselves were convincing and will hopefully become regulars in the local scene.
Finishing the first half was a return to the acoustic guitar for Natasha Haws: a loveable actor revisiting the music performances that helped make her name a few years ago. We had seen her with Fractions and with a smaller set up at the Chase Park Festival. But here with just a guitar we got a chance to hear the stripped down beauty of her songs. She may be embarrassed by the thoughts of her younger self but there was a strong correlation with Kristin Hersh terms of both lyrics and style. The humility of her performance worked will with the audience.
Energetic spoken word frolics followed the interval thanks to the enigmatic Zoe Murtagh. She is now in the girl band GirlHoggand the political punk ethic filled the energetic performance and she got a reaction from the audience. Zoe’s musical influence ensured a real beat to her use of language. The short set was one of the best spoken word performances that we’ve seen this year and Zoe left the stage with us wanting more.
With the audience in a really positive mood the stage was set for the Edinburgh Fringe sensation that is Lauren Pattison. The Newcastle performer has been based in London since the start of the year and she has established herself as a comedian with an increasing profile. Tonight she showed why she has been picking up a string of 4 and 5 star reviews in Edinburgh.  Armed with a sparkly skirt and sharp observational wit she had the Alphabetti crowd laughing with her tales of life in the smoke. Lauren has the potential to go far and it is a real coup for Alphabetti that she will deliver her award winning show Lady Muck at this venue on Thursday 23rd November.
The Soup event, with its mix of music, comedy, poetry and a theatre performance will happen on the first Saturday of the month. Tonight’s mix was well worth the £8 asking price. The one thing I’d change though is to add an extra interval. Like the comedy nights at other venues across the town - a pair of intervals will help the funds at the venue through bar sales and give everyone an opportunity to use the facilities. Alphabetti receives no funding and is entirely reliant on sales for its survival so it makes sense to add the extra break.
Alphabetti is back. The venue is the pulse of the local creative scene. As a venue to try ideas out and establish future stars it is essential that it does well. At least now the venue is no longer hidden upstairs at a pub or down a back alley behind the Odeon. The new St James Boulevard location will help make the venue literally visible and put it on the map for a bigger audience. Hopefully it will break out from Newcastle’s best kept secret to a really popular venue that everyone knows about.
Review by Stephen Oliver.
Coming up at Alphabetti:
Website: https://www.alphabettitheatre.co.uk/whats-on-menu/whats-on
Selected highlights:
The next Soup with Scott Tyrrell Saturday 7th October 2017 https://www.alphabettitheatre.co.uk/whats-on-menu/whats-on/17-whats-on-articles/167-alphabetti-soup-2

The first theatre performance is Overdue - A sensitive, touching and funny play which looks at the ‘what ifs’ and ‘never weres’; the difficult decisions we make, and how those choices and their unspoken effects can shape our lives. Tuesday 5th – Saturday 16thSeptember 2017 (excluding Sunday & Monday)
Including “Pay What You Feel” performances on Tuesdays and Wednesdays NETG Preview link

Blowin’ a Hooley Theatre presents The Filleting Machine - Set in the 1980s, ‘The Filleting Machine’, by North East playwright Tom Hadaway, is a story of industry, family politics and pride.  Tuesday 28th - Thursday 30th November 2017
Tuesday is a Pay What You Feel performance. Read the NETG Review. Details/tickets: https://www.alphabettitheatre.co.uk/whats-on-menu/whats-on/17-whats-on-articles/180-the-filleting-machine 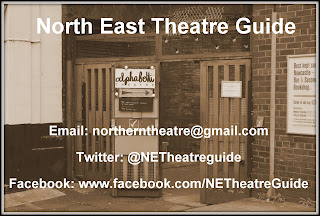