Review: Up the Nerd Punks at Newcastle Alphabetti Theatre

Follow North East Theatre Guide on Twitter at https://twitter.com/NETheatreGuideand on Facebook at www.facebook.com/NETheatreGuide
We would like to introduce to the North East Theatre Guide... Matt Cumminsas guest reviewer:
Henry Raby – Up the Nerd Punks
Newcastle Alphabetti Theatre
Saturday 1st August 2015 and then Edinburgh Fringe (see below)
Dinosaur punk rockers, David Cameron reincarnated as a Pokemon character, the Bedroom Tax, and an analysis of gender roles in “Hey Arnold!” is just a taste of what you can expect in Henry Raby’s excellent show “Up the Nerd Punks”. There’s so much crammed into this piece that a taste is all that a short review can provide, and anyway to appreciate it fully you have to see Henry dance his way through it. He has an infectious energy and he exploits it to the full. Stood mostly on tip-toes, he delivers at top speed what starts as a re-write of Punk rock history (woven, somehow into palaeontology) leaves you feeling energised and excited. I wanted more.
His show is “more ramshackle than other shows” he warns us, but the disclaimer is unnecessary. Raby is extremely capable and very funny and despite these protestations to the contrary we feel very safe in his hands. This is a poet who knows what he’s doing. The poems may be about blue tack and gamer-boys’ untidy bedrooms, but the show is carefully crafted and considered, often with a deeply political as well as a personal message. Behind this dancing, friendly, energetic nerd is a brain, and a man who has clearly loved, and been alone, and been scared and fought for what he wants. And also a man who considers “1984” a friend and who wonders, via a story about writing a letter to himself, whether the real horror of our current situation is that it is the dystopian future that we worry about.
This show is extremely difficult to summarise. There is the familiar and the unfamiliar – he is at pains to try to explain what “cosplay” is to the uninitiated – the political and the personal, the polemical and the poetical. It’s a must see, very good indeed. “Up the Nerd Punks” indeed.
This review was written by Matt Cummins– thanks Matt,
Edinburgh Fringe Tickets: 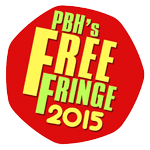