Review: And Then There Were None at Newcastle Theatre Royal


Follow North East Theatre Guide on Twitter at https://twitter.com/NETheatreGuideand on Facebook at www.facebook.com/NETheatreGuide
And Then There Were None
Newcastle Theatre Royal
Until 1st August 2015 and then on tour 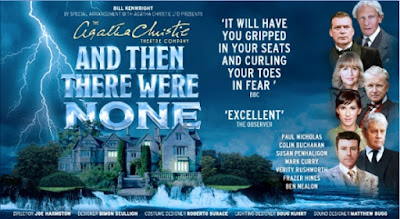 Agatha Christie wrote And Then There Were Nonein 1939 and shortly afterwards she adapted it for the stage. It is deservedly regarded as a whodunit masterpiece. Through her craft as a storyteller she is able to quickly introduce the eight new arrivals on the island off the Devon coast. They are welcomed to the amazing house on the island by the butler Rogers and his wife Ethel. As a production, this show works because each actor is believable in their part without being over the top. The beauty of having ten people in the house is that there are more suspects than a game of Cluedo. The two intervals buzz with theories being discussed by the audience. In short: a quality murder mystery.
Adorning the Theatre Royal stage was a star studded cast, each holding their own. Emmerdale’s Verity Rushworth plays the young and competent secretary Vera Claythorne. She is joined by Emmerdale Farm (as it was called back then) legend Frazer Hines as the professional butler Rogers. Joining them are Jesus Christ Superstar/Just Good Friends star Paul Nicholas as the high court judge Sir Lawrence Wargrave and Dalziel and Pascoe’s Colin Buchanan. Blue Peter’s Mark Curry plays Dr Armstrong. The magic of this production is that their past is immediately forgotten as they feel very natural in this new role.
The play has its lighter moments, largely through the strong acting and characterisation. For example Anthony Marston is a young boy racer. His carefree attitude to life gave Paul Hassall a number of laughs. The dialogue he was given was straight out of Enid Blyton’s “Famous Five” at times but that is in keeping with the 1930s era of the source.
Sometimes a murder mystery starts to drag after the murder, as the characters squabble and claim their innocence for the best part of an hour, but that is not the case here. With 9 people to murder there is plenty of activity on stage. After each death the audience either have to change their guess or nod knowingly. When the big reveal happens there is a loud gasp from the stalls but that doesn’t stop the chorus “I knew it at the start” as they file out. How honest are the audience? I admit it – I was wrong!
The lighting design by Douglas Kuhrt is worth mentioning as it created a real atmosphere in one of the final scenes as the set was candlelit. The huge shadows helped the tension. Director Joe Harmston makes good use of the single room and experienced cast to keep the action flowing..
Along with Agatha Christie’s Black Coffee, And Then There Were None is a super evening’s entertainment. The combination of cunning storyline and strong acting produces a delightful show.
This review was written by Stephen Oliver  the North East Theatre Guide Preview from Jowheretogo PR (www.jowheretogo.com). Follow Jo on twitter @jowheretogo, Stephen @panic_c_button or like Jowheretogo on Facebook www.facebook.com/Jowheretogo
On The Web:
Website: http://www.kenwright.com/index.php?id=1452
Read the original preview from North East Theatre Guide here:
Tickets:
And Then There Were None appears at Newcastle Theatre Royal from Monday 27 July – Saturday 1 August 2015. Tickets from £14.50 (pay 50p less per ticket when you book online). Tickets can be purchased from the Theatre Royal Box Office on 08448 11 21 21 or select your own seat and book online at www.theatreroyal.co.uk
Posted by North East Theatre Guide at 10:32