Return Of The Quest for the Holy Grail 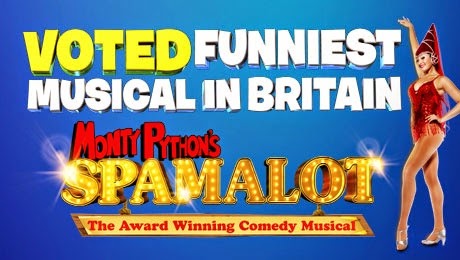 Spamalot
Sunderland Empire
18-23 May 2015
After three excessively silly years in the West End
Monty Python's Spamalot is unleashed (again) in 2015
on an unsuspecting nation with The Quest for the Holy Grail.
Following the Pythons' incredible 10 night sell-out run at London's O2 Arena, Monty Python's Spamalot will gallop back out on tour from January next year, to bring the West End production to theatres across the length and breadth of the (currently united) Kingdom with stars from the hugely successful West End shows bringing the hilarious Monty Python humour and brilliantly funny musical score, plague carts, fish slapping Fins, flying cows, killer rabbits, Knights Who Say Ni, French Taunters and the Black Knight to comedy fans across the country (to the sound of banging coconut shells) **.
Lovingly ripped off from the classic film comedy Monty Python and the Holy Grail, Spamalot is a kind-of new musical with a book by Eric Idle and an entirely new score for the new production, (well, almost) created by Eric Idle and John Du Prez.
Eric Idle says of the show: 'Spamalot is fun. The new production is funnier, it's more like a Python show. There are new costumes and new sets and a new director (Christopher Luscombe), so it's just got a whole different spirit to it.'
Spamalot tells the legendary tale of King Arthur and the Knights of the Round Table and features a bevy (or possibly a brace) of beautiful show girls, witch burnings (cancelled due to health and safety) not to mention cows, killer rabbits and French people. The show features fantastic tunes more magical than a Camelot convention, including He Is Not Dead Yet, Knights of the Round Table, Find Your Grail and of course the Nation's Favourite Comedy Song (Reader's Digest Poll 2010 - before it went bust), Always Look On The Bright Side Of Life.
The latest tour, which is directed by Christopher Luscombe, follows hot on the heels of the can't-believe-how-successful-it-was-with-the-first-show-selling-out-in-40-seconds Monty Python Reunion at The O2 and Eric Idle's acclaimed performance of 'Always Look On The Bright Side of Life' at the 2012 Olympic Closing Ceremony - the world sang along, and Spamalot audiences get = the opportunity to do so too! During the run, there have been 21 onstage moustache incidents, three suspected cases of swine flu (French pigs!), three outbreak of nits and 92 pairs of coconuts used.
Produced by Howard Panter for The Ambassador Theatre Group
Further casting announcements will be made soon
Tickets
Tickets available in person at the Box Office from £10.50 or from £13.40 by calling 0844 871 3022* or booking online at www.ATGtickets.com/Sunderland
*plus a transaction fee applies.
Posted by North East Theatre Guide at 13:05