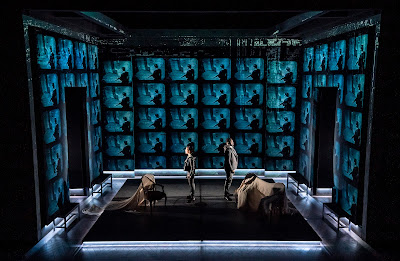 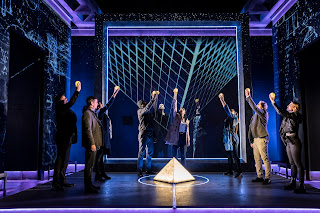 First things first. I have never read the book nor have I seen the movie so this play was going to have to stand on its own two feet. David Woodhead's set, with Lizzie Powell's lighting design and  Adnrzej Goulding’s video projections thoroughly did their part in helping the story to develop. Whilst some moments are projected on a screen for those in the stalls to see what is happening on the floor, it is fair to say the better view is probably in the seats above. 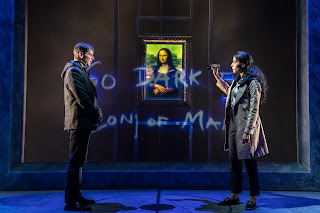 The cast do a valiant effort to bring the script alive and at the interval it was looking like a good mystery was developing. It is very word heavy and the cast have a lot to say and there is a lot of things for the audience to take on board. Some ideas are key and become developed later - other ideas are quickly dropped. But as mysteries go - this is no Agatha Christie classic. Personally I found the ending unsatisfying and the whole thing become somewhat convoluted. 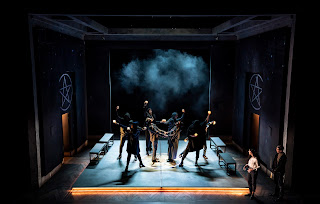 However - it would be a boring world if we all liked the same things and perhaps the 80 million who bought Dan Brown's book will have a better appreciation of the story? 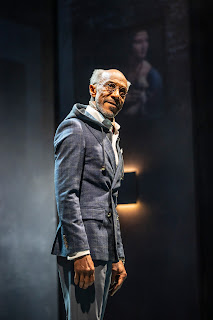 So what is it all about? The play begins in the Louvre, and the curator has been found dead with a symbol on his body. Professor Robert Langdon (Nigel Harman) is on hand to help explain the symbols to police Captain Fache (Alpha Kargbo). They are joined by police cryptographer Sophie Neveu (Hannah Rose-Caton) who helps find some solutions to the clues found at the scene including a number series and a section of prose. Once it becomes apparent that the Professor is also a suspect Neveu assists his departure. 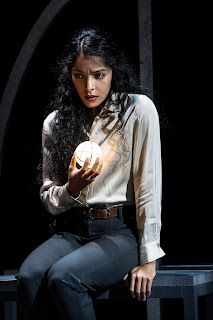 The pair head off to a safety deposit box to pick up a keystone and to take it to a friend of Langdon, Sir Leigh Teabing (Danny John-Jules) who adds further light to the mysteries before the group head off in an attempt to solve the ever growing mysteries. 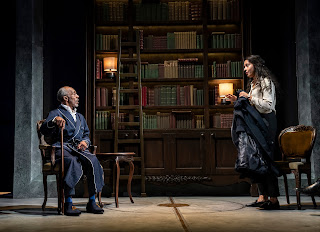 Along the way the audience are exposed to mathematical sequences, the art of Leonardo de Vinci and a broad discussion of the origins of the Christian religion.  As I say, there is a lot to take on board, though the scenes with hand lights and hoodied robes brought back memories of the movie Hot Fuzz more than anything more sinister. It was bizarre to be drowning in exposition and yet not entirely clear what was happening by the end. More haste and less speed - and perhaps a slightly longer running time would have assisted the narrative. 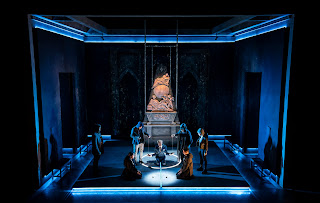 The set and projections were interesting. The cast worked hard with the material but I have no desire to get the book and look further into the story as it isn't for me. Sorry.