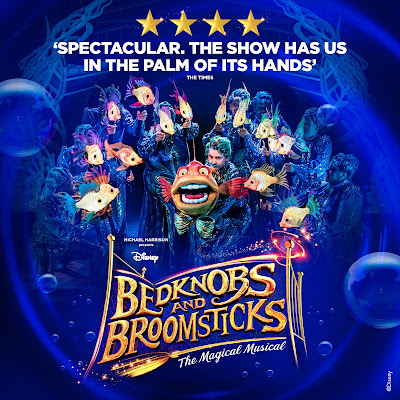 A new family musical based upon a classic Disney movie lands in Sunderland this week. A nice way to spend an evening during the kid's Easter holidays, the show features much of the magic of panto without the slapstick and silliness.

Bedknobs and Broomsticks was released by Disney in 1971. Similar to Mary Poppins in that it featured a London family and special effects that incorporated animation in live action sequences. The music was written by Disney's regular collaborators Richard M. Sherman and Robert B. Sherman who had created those big memorable hits songs for Mary Poppins, Jungle Book and Winnie The Pooh. Their songs also feature in this new musical and are a major component of the show.

Disney had a policy in the 70s and 80s of not releasing much of their film output to television or later video. As a result they would send out the classic to the cinemas each school holiday. This means that the first time I saw Snow White it was on the big screen even though is was released when my parents were born. By holding control, Disney limited what you got to see - no Disney + in those days.

As a result I never got to see Bedknobs and Broomsticks. I don't recall it getting much attention - in direct contrast to Poppins - except on the DIsney highlight TV programmes that would such feature a single song out of context. Those highlights make me feel that I had seen it - Angela Lansbury et al underwater singing with fish for example. But they didn't make it clear what the story was about. But that's enough about the film...we are here to discuss the musical. 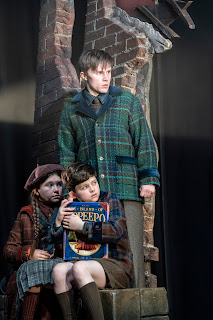 First things first - you are warned that you must be on time as "late comers will not be admitted into the auditorium until 12 minutes after the show start time." In other words "something spectacular is going to happen right at the start and we don't want late comers spoiling it as they try to find their seats." This then presents a problem for me as a reviewer as I don't do spoilers and I tend to just give you the plot for the first 20 minutes of the show. So here goes... 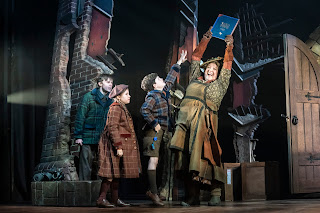 Bedknobs and Broomsticks starts in London during the Blitz of World War 2. The action begins as the Rawlins family go to bed and clearly it is a loving family. As with many children at that time, they find themselves evacuated to the coast and get to see the sea for the first time. The hope was that they were less likely to get bombed out there. 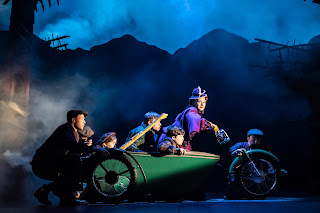 The eldest son Charlie (Conor O'Hara), and younger siblings Paul and Carrie, find themselves at a collection point awaiting the arrival of whoever will look after them for the duration of the war. The only adult present runs a farm and is looking for child labour but as luck would have it, their allocated adult Miss Eglantine Price (Dianne Pilkington) arrives on her motorbike and sidecar to collect them. 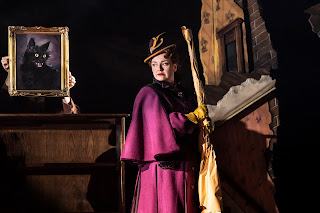 The youngest actors are pooled between the different performances and on press night we were entertained by Sapphire Hagon as Carrie and Haydn Court as Paul. Along with O'Hara as Charlie, they came across as a family unit and they gave a performance that was much more mature than their age would suggest. 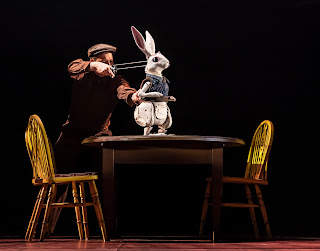 The shows action up to this point has been a wonderful celebration of what can be achieved in a theatre. Much of the start involves no dialogue - rather it is physical theatre relying on the movement of the cast and the props coupled with Gareth Fry's sound design and Simon Wilkinson's perfect lighting arrangements. Jamie Harrison, who co-directs with Candice Edmunds, has been very creative with both the set design and illusions in order to make that opening sequence flow so well. The success of the start is very much down to a busy ensemble and crew that have been well drilled by the movement director Neil Bettles. In short - you don't want to miss the start. 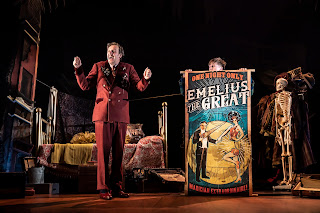 Back to the story... the kids are unhappy as there is something strange about their billeting and they plan to escape back to London. However they quickly discover that there is more to Miss Price than first meets the eye as she has been learning witchcraft through a correspondence school run by Emelius Browne (Charles Brunton). The children witness Miss Price trying out her new broomstick - which is an opportunity for more special effects. Miss Price explains that she is awaiting a new spell that should help finish the war and so the kids decide to stay. 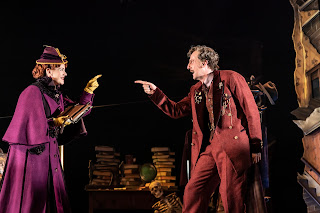 Disaster than strikes as postmaster Mrs Hobday (Jacqui Du Bois) delivers a letter informing them that the correspondence school is permanently closing due to the war. They decide to head off to find the school and get that final spell. The adventure that follow take the audience on a magical tour. 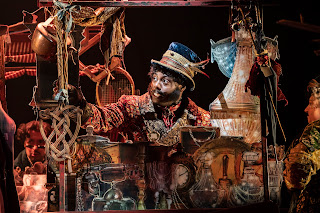 As I mentioned before: for the film some sequences mixed up animated characters with the live action. On stage the animation is replaced by puppets that, in the case of the fish, fill the stage in a visually wonderful way. 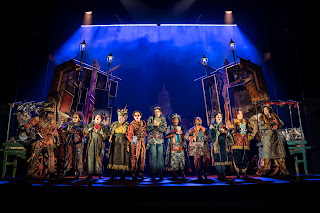 A massive plus for this show is that the action is accompanied by a live orchestra under musical director Laura Bangay. It does make a difference to the sound of a show when it is live music rather than a pre-record. 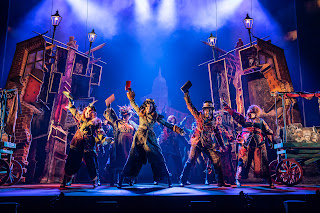 The actors do a wonderful job entertaining the audience for each 67 minute act. The leads sing well and present characters that you want to succeed. But there is clearly an army of swings, ensemble and crew that have to fly on to the stage and make the magic happen on a regular basis. The collective effort is worth it as we have a family show that acts as a perfect bridge between many children's first experience of theatre (ie. panto) and the other amazing experiences that theatre can offer. 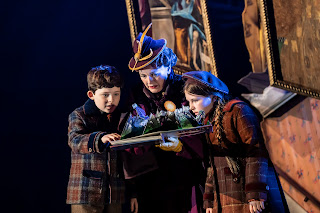 The one thing that is missing that is often a part of live family shows is the opportunity for the occasional laugh. Perhaps it didn't fit this style of production and would be inappropriate. 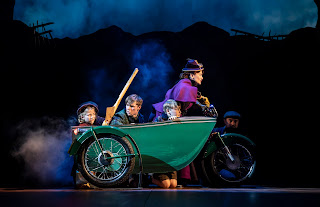 Bedknobs and Broomsticks is a musical that is better than the sum of the individual parts. It is entertaining and has a nice slice of the magic that comes from a live show.

#ad Bedknobs and Broomsticks will play at Sunderland Empire from Tuesday 19 April 2022 running up until Sunday 24 April 2022. Tickets priced from just £13* are available from the Ticket Centre on 0844 871 7615* or online at https://tinyurl.com/SundBEDKNOBS*