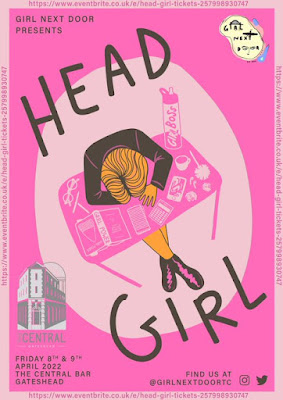 A new all-female theatre group present their first self-written show above a Gateshead pub this week. The result is fringe theatre at its best.

The three members of the Girl Next Door Theatre Company met on the Theatre Royal's Project A training programme. The energy, and indeed the humour, of this production is infectious - it is clear that Project A has served them well.

Caitlin Fairlamb appears as the 17 year old sixth former Becca. A young lady who plans to run for Head Girl at school as she wants to make positive changes. Her programme runs from staggering the lunch times - so that the sixth form get to eat first without interference from the younger kids and to introduce extra-curricular activities so they have something to add to their university applications. The show opens with Becca energetically rehearsing her hustings speech. The body language of her older sister Sophie shows that she is less than impressed but she still offers advice. 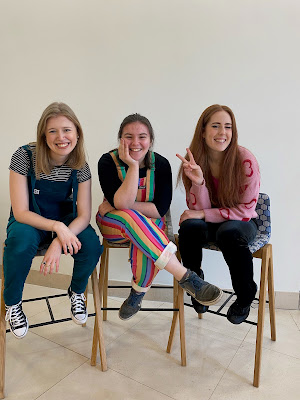 A quick costume change later and actor Rowan Miller has transformed from sister Sophie into best mate Lily. Becca and Lily are close friends with their own phrases and actions that only they understand. As they discuss the Head Girl rivals it is clear that the have been close for a very long time. Just like the opening scene, their discussion brings about spontaneous laughter from audience. As a comedy this piece works well with the couple behind us declaring the show "hilarious" at the end.

Rowan Miller then performs another costume change and appears as Miss Eden - an English teacher who has encouraged Becca but she has some personal news for her.

Director Rosie Bowden has developed a well paced show, despite a number of scenes which can often have the effect to make some shows drag out. It is perfect for Fringe as it runs under the hour mark. The show doesn't make heavy weather of the issues which, with another script, could have been the case. The result is a fun show that reminds one of their school years when, as teenagers, we wanted to change the world as we knew all of the answers. By not jumping down triggering rabbit holes, the show stays fun and entertaining. This is not about making potentially political points but about enjoying our collective childhood.

The actors deliver performances that result in likeable and relatable characters. Both work hard and, for a preview performance, cover any mistakes (if there were any) well.

Head Girl is an enjoyable show and I look forward to seeing future work from this group.  It is "pay what you feel" and they have a credit card machine which made it easy for us to make a donation as we left.

The performances are ‘pay what you feel’ so that they can be accessible to everyone, regardless of financial and personal circumstances.

Note: The venue is not wheelchair accessible.

There will be a relaxed performance on Saturday 9th April at 4pm which will be captioned.

Price - Pay What You Feel