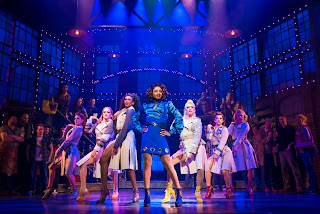 I’d been waiting for Kinky Boots to tour for some time after seeing the show in London the week after the show’s 3 Olivier Award victory in 2016. At the time of seeing it I was a totally mesmerised 18 years of age and I was at that stage where there are so many life decisions that I was needing to make, which in a way mirrors what the main character goes through. Now 2 years later, the show still has a profound meaning for me.

Based on a true-life story, we’re introduced Mr. Price (Andy Watkins), 3rd generation owner of ‘Price and Sons’ shoe factory in Northampton who longs for his son Charlie (Joel Harper-Jackson) to take over the family business, much to Charlie’s dismay as he moves away to London with Fiancée Nicola (Helen Ternent). Upon moving, Charlie learns of the sudden passing of his father prompting, in the eyes of manager George (Adam Price) and the workers, him to take over the declining business and the factory. After a series of concerns for Charlie, a chance encounter with drag queen Lola (Helpman Award Winning Callum Francis) and influence from factory worker Lauren (Coronation Street’s Paula Lane), the factory changes the product from men’s shoes to heeled shoes for male drag queens. Throw in the ambition of a major fashion show, some disgruntled, slightly narrow opinions from a small group of workers led by Don (Demitri Lampra) and the lasting expectation of both Charlie and Lola’s dads, you get a story that focuses on acceptance of yourself, others and controlling your own destiny. 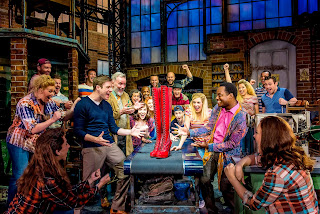 Kinky Boots has one of the best assembled casts I’ve ever seen. Leading the charge, Joel Harper-Jackson beautifully delivers a complex but understated Charlie Price, showing a torn man between doing his father proud but living up to his fiancée’s dreams for them. His vocal skills compliment his acting performance and shows off his range with some wonderful power ballad’s written by pop star Cyndi Lauper.

The supporting principals also give a fully broad performance, even when they don’t get much insight during the plot. Helen Ternent’s job-driven Nicola shows incredible belt power whilst Adam Price’s George shows an overcoming of tameness to assertiveness in his position of authority. Demitri Lampra provides a comical yet truthful performance, allowing the tough façade of Don to be slowly watered down but showcases his laddish heart throughout.

I’m sometimes sceptical about the use of stunt casting for genres you wouldn’t usually associate the stars with. However, Paula Lane, fresh from her stint as popular character Kylie Platt in ITV’s Coronation Street, fits extremely well into the show as the quirky, part hopeless romantic Lauren. Whilst she may not be known for her singing abilities, she more than holds her own in her big number ‘The History of Wrong Guys’ in Act 1 but it’s her sympathetic emotive skills that really caught my eye, playing her humbler and less in your face.

Kinky Boots is the show with an ensemble at the heart of the story, owing each actor at least one little moment, line or character to shine individually. I could list everyone but mentions go to Joshua St. Clair’s vocals as Charlie’s old mate Harry and former X Factor finalist Niki Evans as the straight-talking factory worker Trish.  Another small group of people worth mentioning are the Lola’s backup girls, entitled the Angels. The Angels are made up of 6 of the finest triple threat performers I have ever seen (Connor Collins, John J. Dempsey, Damon Gould, Joshua Lovell, Chileshé Mondelle and Toyan Thomas-Browne); from their first entrance to the finale, they injected sassy, clean, crisp choreography and vocal harmonies with 200% energy (even during an 8:30 evening performance on a back to back show day).

The highlight of this performance has to be Callum Francis’ portrayal of Lola. Every mannerism, line delivery, gesture and breath is effortless and makes you laugh or cry (or sometimes cry with laughter). His voice oozes with power and flair, especially in his 11 o’clock number ‘Hold Me in Your Heart’ and in Act 2 opener ‘What a Woman Wants’ where his sass and charm made this song a personal favourite of mine. It’s a shame he’s only in the show until Christmas as you can tell this is an award-winning performance worth the ticket price alone.

Greg Barnes’ Olivier Award winning costumes, David Rockwell’s set and Jerry Mitchell’s full out direction and choreography compliments Harvey Fierstein’s compelling and truthful book for the touring audiences but not losing the magic created in London and New York. This show also may not have familiar songs but what Cyndi Lauper has created is a fresh, vibrant score that you may not know on the way in but certainly will know on the way out. Overall, this show proves to be a entertaining show but a one that packs an important message “You can change the world if you change your mind”.