The amazing flying car won over the Tyne Theatre crowd as it flew into Tyneside for the first time in an amateur production. A strong cast deliver the classic magical tale with real enthusiasm. This is a real family treat. 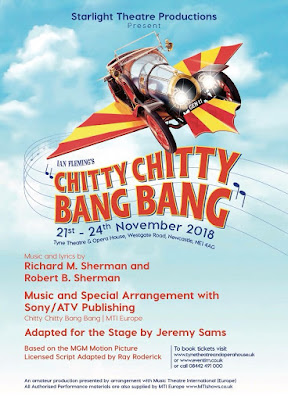 Before setting off I was thinking – how long ago was it when I last saw the film? It must be at least 3 decades or more. Yet, at the time it was a regular on a wet Saturday afternoon on BBC 2. This musical is based upon the 1968 British film Chitty Chitty Bang Bang, directed by Ken Hughes, starring Dick Van Dyke and Sally Ann Howes, and written by Roald Dahl and Hughes. It was loosely based on Ian Fleming's 1964 novel Chitty-Chitty-Bang-Bang: The Magical Car. The musical numbers were written by Richard M. and Robert B. Sherman of Jungle Book and  Mary Poppins fame.

The musical sticks to the film, as I remember it rather than the original novel, and it retains the music and lyrics written by Richard and Robert Sherman with a script by Jeremy Sams.

The story begins with a sad looking Chitty in the middle of Mr Coggins (Alan Tomkins) yard. It may have been the winner of the 1910 British Gran Prix but now it is a wreck being used as a plaything by Jeremy (Mac Toal) and Jemima (Katie Ellis). They use their imagination to suggest the car can still win races, as long as you’re polite to it and say please. Truly (Kim Wilde), the daughter of a local businessman, pulls up with her motorbike that needs attention and she gets talking to the children’s father Caractacus (Ian Cairns). As the bike is getting fixed, a scrapman (Andy Oliver) offers to buy Chitty for scrap. The children are saddened by this news so Mr Coggins says he’ll sell it to their father to fix up if he can match the scrapman’s evaluation. The only snag is that their Dad is struggling for money as none of inventions have been that successful. Fortunately his luck changes and the adventures with Chitty continue.

Meanwhile, over in Vulgaria, the Baroness (Katie Howes) is trying to get the Baron (Andrew Fearon) a present for his birthday. He wants Chitty as he remembers it winning races so Doris (Melanie King) and Goran (David Rawlings) are sent to locate and acquire it.

Director Bryan Watson has the show skipping along at a decent pace throughout. The 2 ½ hours (plus interval) quickly pass by in a blaze of colour thanks to the high quality set and costumes. As panto season approaches, parallels can be draw and this show has similar high production values that are comparable to the more expensive pantos that will be in town soon.

Choreographer Jenn Rouse has done a fine job building in some dance routines that fit the big production numbers.  The numbers are accompanied by a 12 piece orchestra under the capable Andrew Soulsby. They didn’t put a foot wrong as they filled the Opera House with a wonderful sound of those Sherman & Sherman songs.

But in addition to the big ensemble pieces, like Toot Sweets, Teamwork and the eponymous Chitty Chitty Bang Bang, are a number of great spots involving soloists and smaller groups. Starting with You Two with the ever delightful Ian Cairns, Mac Toal and Katie Ellis; Alan Davison with Them Three and continuing with Ian again on Hushabye Mountain, it is obvious that this show has a capable cast.

Chitty Chitty Bang Bang is a very pleasant magical musical adventure that entertains the family. The car literally takes off above the dry ice and raises this show above other amateur shows. The talented cast and crew pull off a charming evening’s entertainment.

Tickets:
Tickets are from £16.50 and are available direct from the theatre Box office.
Tickets are also available online from our affiliate Eventim UK Tickets: http://bit.ly/CCBBatTyne.
Posted by North East Theatre Guide at 00:19