Following the success of Bravo 22 Company’s performance of Unspoken at Newcastle Theatre Royal as part of last year’s Remembrance Day celebrations, the emotional production is now set to tour venues across the UK. 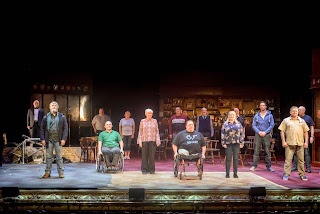 Bravo 22 Company - an award-winning recovery through the arts programme made possible by The Royal British Legion and The Drive Project – will be performing Unspoken at the Pleasance Beyond as part of the Edinburgh Festival from Tuesday 21st – Monday 27th August before heading to Birmingham Hippodrome’s Patrick Studio on Monday 8th – Tuesday 9th October 2018. Unspoken will then have the honour of being the last performance at the House of Commons on Tuesday 16th October before closing the tour in London with further dates to be announced.
Directed by Newcastle Theatre Royal’s Phil Hoffmann and written by Gary Kitching, Unspoken features a courageous cast of Veterans and their families that worked with the theatre’s creative production team and The Drive Project. The production has recently been shortlisted for an Arts Culture Award at The Journal Culture Awards with the winner to be announced at a glittering ceremony on 24 May at Hexham Abbey.
Based upon the company’s real life memories and experiences, Unspoken is a hilarious, yet heart wrenching tale of love, loss, and hope and will see Bravo 22 Company return to the Edinburgh Festival where it previously performed The Two Worlds of Charlie F.

The cast of Unspoken includes Dave Shaw, David Griffin, Debbie Evans, Ian Rudge, Jez Sarrett, Ken Belringer, Larraine Smith, Linda Shaw, Luke Delahunty, Matt Wightman, Mick Carroll, Micky Goble, Simon Graham, Steve Shaw and Tip Cullen. Since Tips’ initial debut with Bravo 22 Company, he has started working as a professional actor and has been cast in several Hollywood films. Larraine Smith was part of Gareth Malone’s Military Wives Choir. Luke Delahunty recently won The People’s Choice prize at the 2018 Soldiering on Awards hosted in April.
Long term member of the Bravo 22 Company, Steve Shaw says: “Performing in Edinburgh with Charlie F was an amazing experience. We sold out the Pleasance Beyond venue and had standing ovations for every show so it’s great to be going back with Unspoken. Being part of the Bravo 22 Company for the last six years has given me so many opportunities, it's built up my confidence, taught me new skills and introduced me to new people. I can’t wait to go back to the Festival”.
Bravo 22 Company delivers arts projects across the country with regional theatres and has built up a proud history of creating high quality pieces of theatre which have provided a platform for the wounded, injured and sick Service personnel voices to be heard, providing a safe and encouraging environment to share their stories. 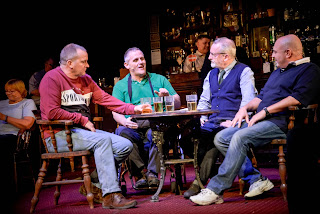 Actor Ray Winstone is The Drive Project and Bravo 22 Company’s Ambassador. He said: “Bravo 22 Company is a project I have been involved with since it began in 2011 and saw the success of its original production, The Two Worlds of Charlie F. I am delighted that due to this success it now delivers theatre and arts projects around the country to benefit the recovery of wounded, injured and sick service personnel, veterans, reservists and their families.”