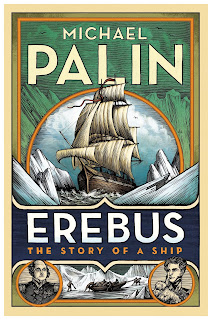 Michael will be discussing his latest book, Erebus.

In his major new work, the former Monty Python stalwart and much-loved television globe-trotter brings to life the world and voyages of HMS Erebus, from its construction in the naval dockyards of Pembroke, to the part it played in Ross's Antarctic expedition of 1839-43, to its abandonment during Franklin's ill-fated Arctic expedition, and to its final rediscovery on the seabed in Queen Maud Gulf in 2014.

Michael explores the intertwined careers of the men who shared its journeys: the organisational genius James Clark Ross, who mapped much of the Antarctic coastline and oversaw some of the earliest scientific experiments to be conducted there; and the troubled Sir John Franklin, who, at the age of 60 and after a chequered career, commanded the ship on its final journey. And he describes what life on board was like for the dozens of men who stepped ashore in Antarctica’s Victoria Land, and for the officers and crew who, one by one, froze and starved to death in the Arctic wastes as rescue missions desperately tried to track them down.

To help tell the story, Michael has travelled to various locations across the world – Tasmania, the Falklands, the Canadian Arctic – to search for local information, and to experience at first hand the terrain and the conditions that would have confronted the Erebus and her crew. Michael will share these stories in this fascinating and intimate event.

Theatre Director Joanne Johnson says: “It’s an honour to welcome Michael Palin to our stage, and I’m thrilled to team up with our local Waterstones to present this show. We’ve just announced that Hollywood icon Joan Collins will bring her ‘Unscripted’ tour to the theatre, and we also have ‘An Evening with’ the one and only Brian Blessed – also both in September. It’s safe to say September 2018 is the month of British legends at Tyne Theatre & Opera House!”

Tickets are now available from the Tyne Theatre and online from our affiliate EventimUK: http://bit.ly/MPalinNCLTix