Anna Nicholson: Woman of the Year ★★★
Newcastle Holy Trinity Church
Friday 4th May 2018
Before appearing in London and at Brighton Fringe (as ‘NickNacks’) and Edinburgh Fringe 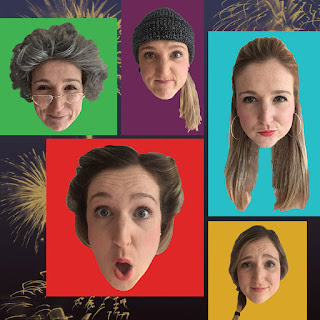 It is May and the fringe previews have begun ahead of the fun starting in Brighton and Edinburgh.  Tonight’s show saw comedy come to the very impressive Holy Trinity Church which stands out in the centre of Jesmond. Somehow the setting worked and selling over 100 tickets to a very enthusiastic audience clearly help.

Anna Nicholson appears in multiple roles in a sketch show that is as good as the celebrated Tracey Ullman's Show.  Each of the female characters is presented to the audience as taking part in a “Woman of the Year” competition which the audience will vote for at the end of the show.

First up is department store lingerie sales assistant Denise who suggests that she could give a member of the audience a bra fitting. The description of what it would involved had the audience tittering away. Bursting into song with a modified version of the Willy Wonka & the Chocolate Factory classic Pure Imagination was very Victoria Wood.

Schoolgirl Jodie from Merseyside describes how she loves helping and wants to go from setting up an Ant hospital to becoming Gandhi. It is a neat observation of teen ambition that seemed influenced by The Catherine Tate Show.

Popular with the Newcastle audience was Tyneside fashion celebrity Bianca. The lashings of confidence game across as she gave tips to the audience. Another character which seemed to work well with this evening’s audience was Middle England’s Reverend Ruth. I never knew churches were so competitive when it came to fund raising.

Finishing the set was Shirley from scummy Yorkshire. Hang on a minute – I’m from Yorkshire and the place is lots of things, but scummy isn’t apt or funny.  That aside, Anna elicits responses from the audience in a very pantoesque style. At least we found out why pilates is offered to the retired.

The show has lots of potential. Indeed, as this is just a preview, the final show that hits the fringe may change slightly as the running time will probably need to decrease slightly to get it under one hour. Different characters will appeal to different audiences on different evenings. Moving the show down south will be interesting as the northern stereotypes will create a different reaction compared to a home crowd. Certainly, there is scope for this show to tour across the North. It’ll be interesting to see what Anna comes up with next.

On The Web: https://www.anna-nicholson.com/
Posted by North East Theatre Guide at 12:45