A journey to a new world full of song and discovery. When faced with a new culture or visiting a n ew place, what do you bring with you? What do you leave behind?

This international collaboration brings together original music intertwined with traditional South African and Geordie songs, verbatim testimony and storytelling. This World Here…Nomhlaba Le will take you on a journey exploring community and belonging, celebrating diversity and uncovering our unconscious biases. Asking...where is home? 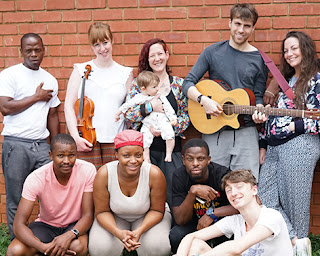 Artists from Curious Monkey and NADO met at the National Arts Festival of South Africa in 2015 where Curious Monkey was running the Remix Laboratory programme in partnership with the Swallows Foundation UK. NADO, a theatre company from Newcastle in Kwa Zulu Natal won a provincial competition to attend the Remix programme. The work they make is political, provocative and tells the stories of township life and the issues faced by their communities. The impressive a cappella vocal skill of the group blows you away when they sing together and their encouraging facilitation of others in supporting them to sing is inspirational. The two
companies had an unforgettable ten days working together, most importantly they left knowing that they had to work together again, they had developed a mutual respect and fascination with each other’s processes of making theatre.

The show has been developed through a series of international exchanges, originally commissioned as the flagship cultural project of Newcastles of the World supported by International Newcastle in 2016.

This May the show will be staged at the Exchange in North Shields and Alphabetti Theatre in Newcastle. The two companies will run workshops with Mouthful Voices at Gosforth Civic Theatre who will perform a curtain raiser for the show on the 26th May at the Exchange. There will also be a workshop for year 5 and 6 pupils at Hotspur Primary School and visits to Hexham and North Tyneside Hospitals in partnership with the NHS Northumbria Healthcare Foundation Trust to share the songs and stories from the show with patients.

The production has been edited and directed by Amy Golding who founded Curious Monkey in 2011.  She has recently written and performed Preggers , which toured the UK in 2016 and has many directing credits to her name.

Amy explains   “We have been developing this show very slowly over the last few years as the two halves of the creative tea m live in opposite hemispheres, by coming together when we could and also on a Whatsapp group. Everyone involved has had a chance to spend time reflecting on their own home as they have hosted people from the other side of the world and through doing so have been encouraged to look at their Newcastle with new eyes. We have all also spent time in a new place that shares the same name as our home but is very different in many ways, experiencing a new culture by becoming embedded in it . Creating a show together in these international contexts (one much hotter than the other!) resulted in such rich and powerful conversations about everything from history to race, travel to home and everything in between. The time we spent together was beautiful and challenging and I believe for all of us in some way transformational. And the joy of it all being wrapped up in learning and creating new music together with a group of truly talented singers and musicians. We can’t wait to bring the show together.”