The Cutting Hedge Comedy Club has been packing the audiences in since its launch. Taking place at the Gateshead Rugby Club in Low Fell, the venue has had a lot of work done recently making it ideal for such comedy events. They are now getting request from touring comics to use our venue. They are hoping the success of the previous shows is a springboard to hosting more touring shows and bringing the best comedians to Low Fell.

Cutting Hedge comedy was formed in October 2017 and its first event sold out within a matter of a week. Our first line up was Lee Kyle, Carl Hutchinson, Will Duggan & Anthony King

This was followed up by another great night of comedy in February which again sold out very quickly. The line up that night was Mike Wilkinson, Bennett Aaron, Nick Cranston & David Hadingham. 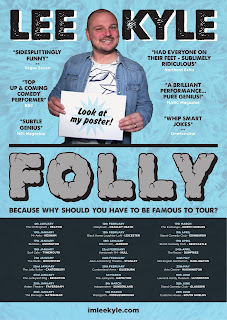 Following on from the success of the first night they had a special request from Lee Kyle to see if they’d also he interested in being part of his national tour. Lee is a wonderful off the wall comedian and his touring show is based around the idea of :-

What happens if you do a tour while not actually being famous?”
Then, as if that wasn’t enough, he is ending the tour with a gig in a 400 seat theatre in his home town.
He’ll also be recording a documentary as he goes, while hoping not to regret it. The North East Theatre Guide reviewed the first show of the tour and said the show was “an entertaining show that is well worth catching on its trip around the country and it’ll cost you less than the booking fee that you’ll pay for certain comics that appear on the TV but are, to be frank, not that funny.”
Lee is bringing this show to Low Fell on Wednesday 28th March and he’s supported by Sammy Dobson who starred in Byker Grove, Boy meets Girl, I, Daniel Blake etc.
Tickets are available from our affiliate See Tickets: http://bit.ly/LeeKyleGateshead 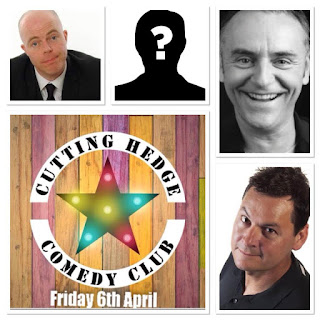 If that’s not enough then Cutting Hedge Comedy returns for a third instalment on Friday 6th April with a stellar line up of comedy store regulars including Phil Walker – Son of catch phrase legend Roy, Roger Monkhouse (No relation), Micky Hutton of Spender, Crocodile Shoes and Hangar 17 fame. There will also be a very special guest in the line up but due to contractual agreements we can’t name them as yet.
Tickets are available now via
http://www.cuttinghedgeevents.com/comedy-night-april-6th/
For more info head to www.cuttinghedgeevents.com
Or follow them on Facebook via “cutting hedge comedy club” or “cutting hedge events”
They are also on Twitter @cuttinghedgecom
Posted by North East Theatre Guide at 22:14