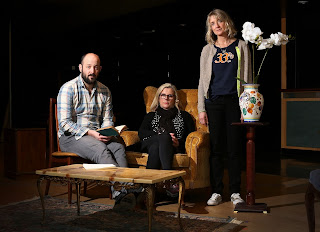 Durham Gala following last year's success with Educating Rita with an in-house production of 3 of Alan Bennett's monologues that were originally written for TV. Each one is seemingly unconnected and yet quintessentially British in tone. The delicate humour of one of the country’s most important playwrights is allowed the space needed in a well-crafted piece. With an apparently simple yet well-designed set by Simon Wells, comprising of a bed, door and window, the words are given the opportunity to stand out. Three gifted actors held the attention of the Durham crowd with their tales of the awkward nature of real adult life. 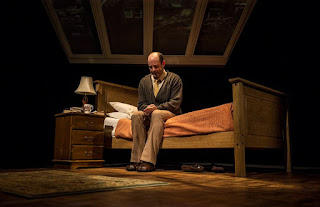 First up was A Chip In The Sugar. An elderly mother is out with her son Graham when the mother slips. Her son recalls how, when he went to see to his mother, an elderly man comes across to assist. It turns out that it's an old flame from his mother's past. Pre-Dad indeed. For a woman with limited memory normally, she seems to remember a lot about their first encounter.  Bennett then weaves a tale of the problems of accepting that your elderly parents still have a life and relationships.  Add in a measure of elderly racism and mental illness and despite the fluffy initial set up, there is a cutting examination to be considered. Like all of the stories, this one leaves a mark on the audience. The delivery by Ross Walton was very much in the Bennett style which fitted the script well. If you can have "Shakespearean" as a style, then why not "Bennettean"? 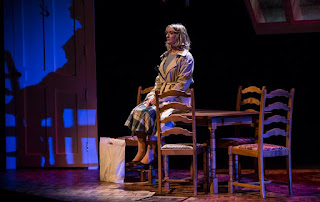 The first act concludes with Zoe Lambert as the disenfranchised Vicar's wife Susan in bed Among The Lentils. Internal mental and aspirational battles, with life style choices, the parishioners and late-night shopping, torment Susan. Rather than using, say, a pop star as the difficult role model, Bennett pours his quirky observations of middle England into that world of hymns, Victoria sponges and flower arrangements.  Like all 3 monologues we have the regular gentle humour that has the audience laughing as they join in on the joke. At one point the audience burst into spontaneous applause as they were pleased at Susan’s response to the request of the shopkeeper. 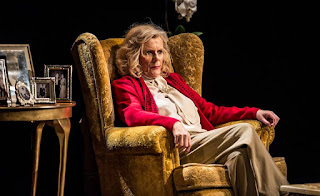 The final monologue saw the second act curtain raise to reveal some really nice furniture and paintings for Soldiering On. Judi Earl was powerfully poignant as Muriel, a lady who has just buried her husband. She reminisces how he loved to talk about the farming machinery that he dealt with but said little about the family finances. Bennett reveals a number of twists and turns in the mould of The Father as Muriel’s life changes despite getting regular advice not to jump into any big changes. 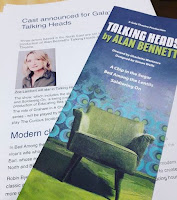 Director Charlotte Westenra’s skill was to allow the narration to be very natural. It felt like you could know the individuals. This also gave the actors the freedom to respond to the nature of events. Hence when a coat hook fell off, Zoe was able to deal with it, in the style of her character.

Talking Heads is a thoroughly absorbing trio of well-crafted pieces of theatre. Recognisable, sympathetic and not covered in artificial sweeteners. The younger members of the audience will have as much to reflect upon both the direction Alan Bennett took and the clear, well-acted form of the presentation. A delightful evening of theatre.
Review by Stephen Oliver

Tickets:
Talking Heads is at Durham Gala from Tuesday 6th to Saturday 10thMarch, with tickets priced at £15 or £12 for matinees.

For more information or to book visit www.galadurham.co.uk