AWARD-WINNING SHOW ABOUT SUNDERLAND AFC TO RETURN IN APRIL 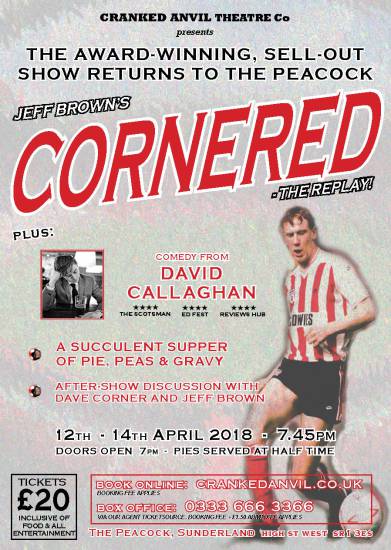 Welcome to ‘Pie & a Play’ from Cranked Anvil!

After its successful sell-out run last September, Jeff Brown’s one-man play ‘Cornered’ is set to return to The Peacock in Sunderland in April this year.

The show, which starred Steve Arnott as ex-SAFC player David Corner, featured in the North-East Theatre Guide’s Best of 2017 list, in their ‘Proud to be in the North-East’ award.  Arnott will be returning to the role again this year, to tell the story of Dave Corner’s fateful day in 1985 playing against Norwich in the Milk Cup final at Wembley, and what happened to him afterwards.

As it proved so popular last year – and with many people unable to get tickets first time round – Cranked Anvil are delighted to be reviving this show, this time with a resident run at The Peacock.  Paul Scott, general manager of the venue, said: “The Peacock is quickly turning into an iconic and sought-after entertainment venue here in Sunderland, in the centre of the MAC Quarter.  We’re delighted to have Cranked Anvil back with us again with this brilliant play based around SAFC.”  The night’s entertainment also includes a Q&A with Jeff Brown and David Corner, a stand-up set from Sunderland comic David Callaghan, as well as a pie & pea supper served up by The Peacock’s chefs.  All for just £20 a ticket.
About the play, Cornered by Jeff Brown… On 24th of March 1985, a dream comes true for a young football player from Sunderland. just 18 years old, Dave Corner runs out onto the hallowed Wembley turf, to play in a cup final for his beloved home team.  Less than 90 minutes later, a slip up on the pitch turns the dream into his worst nightmare – from which his pride, his physical safety, and ultimately his career, never recovers. This funny and at times poignant play by BBC Look North’s Jeff Brown finds out what happened to Davey Corner after that fateful day against the Canaries…