To commemorate the 30th anniversary of the death of legendary North East comic Bobby Thompson, Pete Peverley is bringing his cult stage show The Bobby Thompson Story to Newcastle Theatre Royal this month for two nights only.

Sunderland-born comedian Bobby Thompson (also known as “The Little Waster” due to his short stature) was active in the working men’s clubs of the North East between the 1920s and 80s.  Working down the pits from a young age, he supplemented his income playing the harmonica and competing in domino tournaments before perfecting his comedy routine.  He quickly become a big favourite and an instant sell-out on the club circuit, and in no time one of the most popular Northern comedians of his day.

Bobby’s trademarks were his broad Pitmatic (County Durham pit village) accent, his self-deprecating humour, and his great mastery of the ‘mother-in-law’ joke.  He almost always appeared on stage in his worn-out stripy jumper “wooley gansey” with a flat cap and a woodbine cigarette.

Pete’s self-devised one-man show is a celebration of the life and work of Bobby, a touching and heartfelt tribute to his immense talent, and also the culture to which we North Easterners owe our very unique identity and sense of humour. In it, Pete also explores the two sides of Bobby Thompson – the brilliantly cheeky public-facing Bobby everyone knew and loved as well as the private Bobby - a withdrawn man troubled by drink, gambling debts and the tax man. 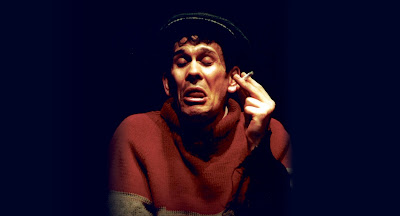 Washington born actor Pete Peverley trained at Newcastle College and began his career at Live Theatre and Northumberland Theatre Company. He was a member
of the Northern Stage Ensemble for 15 years where he appeared in many productions including Animal Farm and A Clockwork Orange. He spent three
years with the RSC and played Friar Laurence in Rupert Goold’s production of Romeo & Juliet when it came to Newcastle in 2010. Pete has appeared in all but one of the much loved Sunday for Sammy concerts at City Hall. His television credits include Byker Grove and Spender. He is a regular in Newcastle Theatre Royal’s block-buster festive panto having appeared in the previous four spectaculars.

Pete’s fascination with Bobby began in 1988 when he was selected to perform a 10-minute piece of Bobby’s routine on a club tour with his local theatre group.

Peverley began to research Bobby’s life extensively – talking to local people, friends and family, and those who’d worked with the comic.  He co-developed a musical tribute entitled The Little Waster, which was very well-received and led to the Thompson family offering the actual stage costumes worn by Bobby for use by Pete.  In 2001, he devised his one-man show about Bobby’s life and has toured successfully with it ever since, also appearing on the bill for the Sunday for Sammy concerts at the City Hall and creating two commemorative TV pieces.

He said: “Bobby had a special place in our hearts and minds and with this 30th anniversary tour, I hope I can help people relive some of the wonderful moments they had in his presence, initiate the uninitiated, and recreate some of the magical memories we all have of this very special man.”

Tickets:
The Bobby Thompson Story appears at Newcastle Theatre Royal Friday 16th & Saturday 17th March 2018 (Evenings: 7.30pm, Matinee: Saturday 2.30pm). Tickets are from £10.00 and can be purchased from the Theatre Royal Box Office on 08448 11 21 21 or select your own seat and book online at www.theatreroyal.co.uk.
Posted by North East Theatre Guide at 17:56