Orang-utan Story will Grip Theatre Goers
Frank Sumatra
South ShieldsCustoms House
Monday 9th March 2015
An award-winning playwright is returning to The Customs House next week.
Mike Yeaman, who has penned success stories Lucky Numbers and Canoeing For Beginners, brings his latest show, Frank Sumatra, to the Mill Dam venue on Monday.
This dark and surreal comedy is performed live in the style of a radio drama at the venue’s studio from 8pm. Mike, whose plays have been performed all over the world, said: “I’m thrilled to be back at The Customs House with my new play. Imagine Paddington Bear gone wrong. And not a bear.  Bev and Keith are a nice young couple who do their bit for the environment. They have a weekly organic veg box delivered and pay ten quid a month to the World Wildlife Fund to sponsor an orphaned baby orang-utan in a Sumatran ape sanctuary. They’re also trying very hard to have a baby of their own to make life complete. But then their orang-utan turns up on the doorstep in search of his adoptive parents. The cute baby on a website is now a lolloping 13st of hair and muscle. Frank soon has his grippy feet firmly under the table and Bev and Keith are flung into parental angst dealing with a belligerent teenager with no moral compass. “
Lucky Numbers, starring Hebburn’s Pat Dunn, played to hundreds at the venue in October and Customs House Executive Director Ray Spencer, MBE, is looking forward to seeing Mike’s latest show. He added: “We’re delighted to have Mike back with us next week. It sounds like a somewhat surreal piece but I’m with Mike at the helm it’s sure to be a must-see.” Read the Jowheretogo Lucky Numbers review 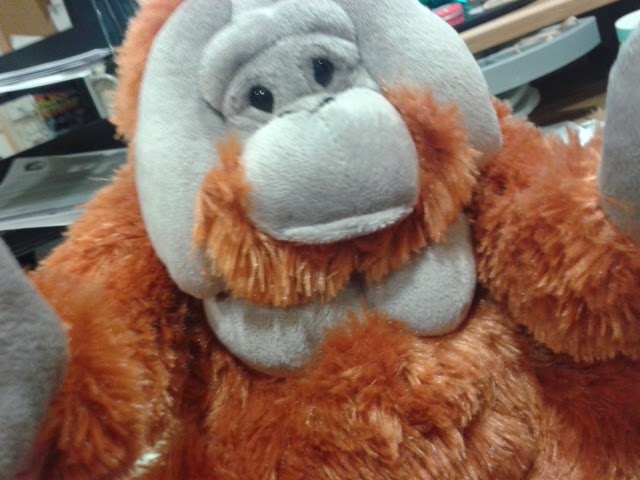 Tickets
Tickets for Frank Sumatra are £11 and are available from the box office on (0191) 454 1234 or by visiting www.customshouse.co.uk
Posted by North East Theatre Guide at 10:43