With an election looming, and new voices appearing in main stream UKpolitics, Chris Thorpe and The TEAMArtistic Director Rachel Chavkin examine the phenomenon of confirmation bias and attempt to have an honourable dialogue, real and imagined, with political extremism.
If you pinned me against a wall, I’d probably admit to being a liberal. Of course, pinning me against a wall is exactly what I’d expect from someone like you. A show about the gulfs we can’t talk across, and about the way we choose to see only the evidence that proves we’re right. A multi-award winning creative team explore the phenomenon of ‘confirmation bias’, examining and questioning the rise of extremist thinking within the UK’s political landscape and exploring the strength and grounding of people’s beliefs. Originating from Chris Thorpe’s own frustration with the current level of political discourse in the UK, and his own ‘liberal’ bias, the work has been developed the rough academic research and through conversations with political extremism, in an attempt to open discussion on the subject in a more objective environment.
‘Rachel Chavkin’s fast-moving, kinetic production offers us an absolutely compelling performance from a man who is fast becoming one of the most powerful performers in the UK’The Scotsman ★★★★
Chris Thorpe has been at the helm of some of the most critically acclaimed productions in recent years, from the Fringe First winning The Oh F**k Moment (2011) to What I Heard About The World(2012), the Total Theatre Award and Arches Brick Award winning #TORYCORE (2012), There Has Possibly Been an Incident (2013), and I Wish I Was Lonely (2013) at Forest Fringe. 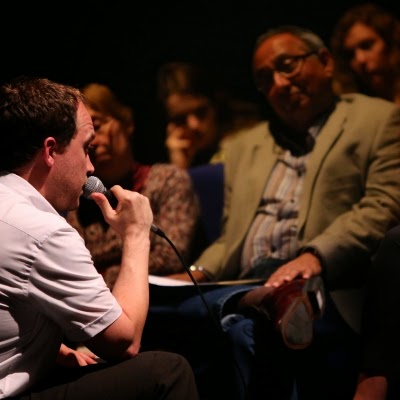 Chris was a founder member of Unlimited Theatre and still works and tours with the company.He is also an Artistic Associate of live art/theatre company Third Angel as well as working closely with, among others, Forest Fringe, Slung Low, Chris Goode, RashDash, Belarus Free Theatre and Portuguese company mala voadora. As a playwright, Chris has written radio and stage dramas, as well as translating the work of Ugljesa Sajtinac, Belarus Free Theatre, and Ze Maria Mendes.
Rachel Chavkin is the Artistic Director of the multi-award winning The TEAM, a New York City-based theatre company dedicated to dissecting and celebrating the experience of living in America today. Their work includes: Give Up! Start Over! (In the darkest of times I look to Richard Nixon for hope) (2005), A Thousand Natural Shocks (2005), Particularly in the Heartland (2006), and Architecting, a co-production with the National Theatre of Scotland, in 2008. The TEAMare four-time winners of the Scotsman Fringe First Award (2005, 2006, 2008, & 2011), Winner of the 2011 Herald Angel, the 2011 Edinburgh International Festival Fringe Prize, Best Production Dublin Fringe 2007 and 2008 Edinburgh Total Theatre Award. Their critically acclaimed Mission Drift transferred from the Traverse to the National Theatre in Summer 2013.
Writer / performer Chris Thorpe  said about developing the show: “I guess I've always been fascinated by conviction, because it seems mysterious to me. Not that I don't have deeply-held beliefs – I do – but because those beliefs weren't necessarily specific, burning certainties.  They were more beliefs about the application of concepts. That there must be some reasonableness in every point of view, however small. That there's a time and a place for a fair hearing, foreveryone. Because underneath it all, the surface conflicts and the differing interpretations of 'facts' there had to be some kind of truth. So I decided to investigate how the processes that allow us to form a worldview are thought to work. And these processes are double edged – the information gathering and filtering that makes daily life possible, applied on a larger scale, contain this huge potential for destruction. I decided to talk to someone of conviction. To see if it was possible to have a conscious conversation about those unconscious processes. A respect full conversation.  To listen to those voices, and my voice, to see if we could get beyond the conviction. Maybe make my own liberalism less lazy. To see what that might do to me.”
On The Web:
Website: http://chinaplatetheatre.com
Twitter: https://twitter.com/piglungs | https://twitter.com/youroldchina
Facebook: https://www.facebook.com/chinaplatetheatre
Trailer: https://vimeo.com/103696419
Tickets:
Warwick Arts Centre and China Plate presents
CONFIRMATION
23rd March – 24th March, 7.30pm Newcastle Northern Stage
Written by Chris Thorpe
Developed with and Directed by Rachel Chavkin
FRINGE FIRST AWARD WINNER, Edinburgh Festival Fringe
Commissioned by Northern Stage and Battersea Arts Centre
Running time:80 mins
Post-show discussion:Mon 23 Mar