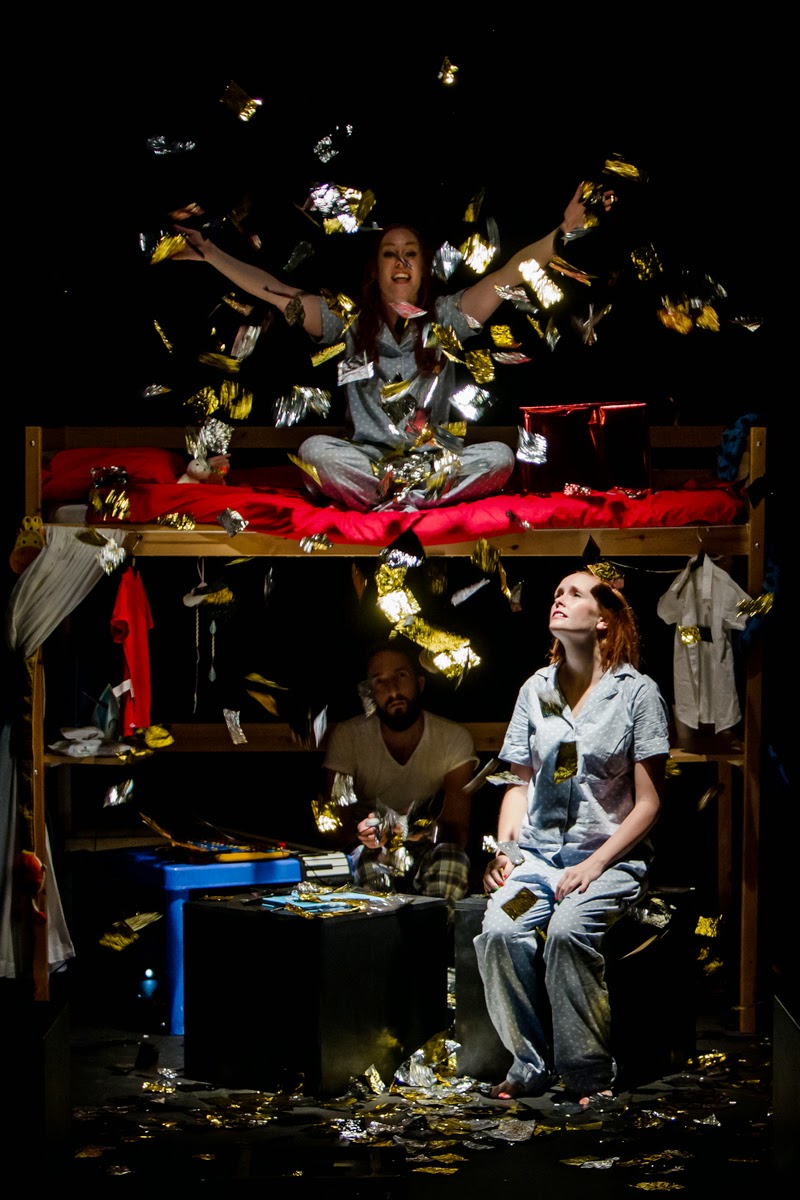 The Paper Birds return to the region with another heartfelt performance which resonated with its audience. After last year’s Thirsty, which Jowheretogo rated as The Small Scale Production of 2014(link to awards article) -  review: link to Jowheretogo review, it is great to another vibrant show.
It is clear that they have done their research and looked into the effects of debt with a range of people of differing backgrounds. A number of these tales are woven into the start of the show, which features a mixture of clever animations and lighting effects. As the taped recordings are fast forwarded the cast try to emulate the effect. Fairly quickly the drama centres mainly around a mother called Sally and her money problems.
Sally has a son and she is struggling to find the money for food and heating. She would like to be able to buy her young son an ice cream when he asks for one. We don’t get her full life story nor is a solution suggested and this adds to the power of the performance as it is left to one’s own mind to make those links. Her situation is given in stark contrast to the tale of how the Paper Birds actress Kylie built up her own debt starting with her time at university. 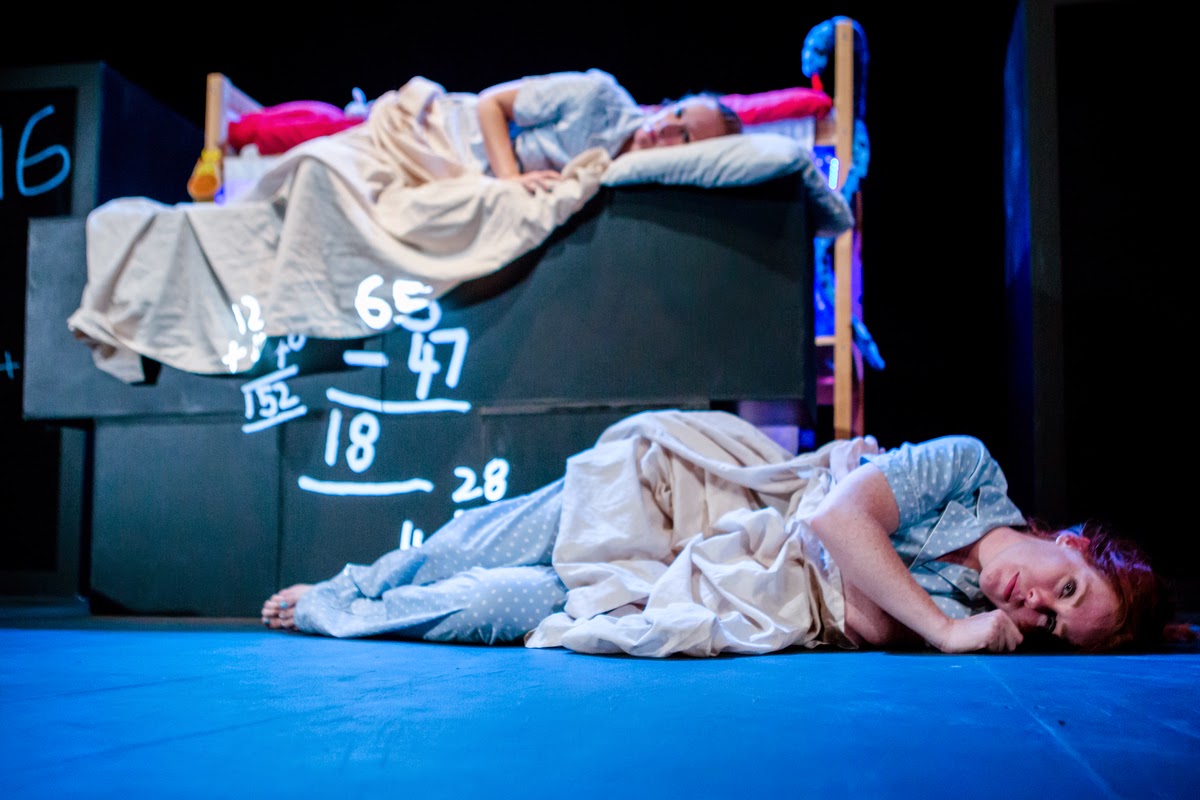 The individual stories, such as selling goods to pay off lenders, are in contrast to the overall story of the national debt and how the countries economy relies on individual debt. The facts are kept brief and hence interest is maintained.
Lighting, sound and animation design add to, rather than detract from, the feeling of the show. Two boxes, in which Jemma McDonnell and Kylie Walsh deliver many of the stories are a clever device. Shane Durrant     has a greater role than adding music but it is perhaps adding suspense to the Deal or No Deal section that saw him in his greatest element.
The show has real impact because it is discussing real people and the current state of the nation rather than some fictional hypothesis. It is easy to see how one’s personal debt profile evolves from small lender to a much larger problem. The show does not go into the morality of either the “buy the latest model now, pay for it later” mentality or low wages resulting in our working poor.
A moving factual production which leaves the audience with plenty to think about.
This review was written by Stephen Oliver for Jowheretogo PR (www.jowheretogo.com). Follow Jo on twitter @jowheretogo, Stephen @panic_c_button or like Jowheretogo on Facebook www.facebook.com/Jowheretogo
Original Jowheretogo Preview: link to preview

Devised by The Paper Birds
Directed by Jemma McDonnell
Composer Shane Durrant
Audio Visual design by The Media Workshop
Lighting design by Kylie Walsh
Set design by Fiametta Horvat and The Media Workshop
Produced by Bonnie Mitchell
Performed by Jemma McDonnell, Kylie Walsh and Shane Durrant
Broke is co-commissioned by and developed at West Yorkshire Playhouse and Greenwich Theatre. Funded by Arts Council England.
Theatre coming up at Arts Centre Washington in April
Chicken Licken
Wednesday 15 April, 11am + 2pm, Tickets £6 / £20 (family, admits 4)
Mixed into this recipe of food, puppets and music is the story of Little Red Hen and the sly Foxy Loxy. Will she outwit him and save her stuffing? For children aged 3 +
Accidental Death of an Anarchist
Thursday 23 April, 7.30pm, Tickets £6.50 / £5
Dario Fo's satirical comedy is based on a true story. An alleged anarchist terrorist falls to his death from a fourth-story window at police headquarters during the course of an interrogation. Did he jump or was he pushed? Presented by the University of Sunderland’s drama department as part of Sunfest.
The Pitchfork Disney
Saturday 25 April, 7.30pm, Tickets £6.50 / £5
Philip Ridley's controversial play is generally regarded as the play that kick-started the "In-Yer-Face" theatre movement in the 1990s. The play is a dreamlike piece which deals with childhood fears and trauma, and contains material that some people may find offensive. Presented by the University of Sunderland’s drama department as part of Sunfest.
Top Girls
Thursday 30 April, 7.30pm, Tickets £6.50 / £5
Cited by Mark Ravenhill as ‘the best play in the last twenty years’, Top Girls stimulates debate on gender politics, poverty, class and the machinations of capitalism. Marlene, the newly appointed managing director of Top Girls employment agency throws a dinner party for famous women throughout the centuries – all long dead.  Presented by the University of Sunderland’s drama department as part of Sunfest.
ARTS CENTRE WASHINGTON
Biddick Lane, Fatfield,  Washington.  NE38 8AB
Telephone 0191 219 3455
www.artscentrewashington.co.uk
Posted by North East Theatre Guide at 08:09