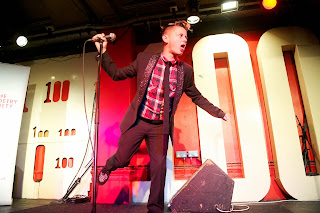 Twice a year Stage 3 of Northern Stage is home to the eclectic spoken word event that is Radikal Words. An evening made up of a mixture of passionate poetry with soothing musical interludes.
During the first spoken word set host Jeff Price waxed lyrically about the issues of age and relationships. Highlights included losing your daughter temporally as she heads off to her first festival and Saga Louts, about how the older folk misbehave. Jeff’s 20 years of experience came across as he entertained the appreciative audience.
Teeside’s Jo Colley loves her rabbits, and not just because they eat their own poo. Hungry was one of 2 poems to elaborate on the furry creatures. Jo also highlighted how careers advice for girls has changed and the suggestion that the pinnacle of a girls ambition might once have been an air hostess.
James McKay increased the pace with shorter pieces like Piccadilly, reflecting upon his experiences of living in London. 300 000 was an extended piece about the chaos of Radio 1’s Love Parade in Leeds as ten times more people turned up than expected. Mixing up the shorter and longer work kept the pace up.
Acoustic music from Ditte Elly started both halves in her third appearance at Radikal Words. Ditte was finger picking her way through numbers on diverse topics from North Sea shipwrecks to winter via her feelings about her brother.
Northern Stages’ own Vinny Boy McHugh clearly loves writing poetry and he articulated the experiences of a young man living in Tyneside who is acutely aware of the history of the region. It is refreshing to hear the writings of a happy poet. His reflection of society’s woes was strongly pulled into focus with the brilliant Bankers.
The show finished with a performer who blast though like a fast moving steam train. Through strong personal experiences working with young people Joelle Taylor passionately presented the issues of self-respect and self-esteem of a troubled generation. Poetry about the young carers on the Isle of Skye and the harsh nature of coming of age on the council estates are presented without judgement or prejudice.  Joelle ensured that the evening finished with an energetic conclusion.
Poetry should be presented live and the evening’s performances, and the fabulous word craft, were a joy to behold.
This review was written by Stephen Oliver for Jowheretogo PR (www.jowheretogo.com). Follow Jo on twitter @jowheretogo, Stephen @panic_c_button or like Jowheretogo on Facebook www.facebook.com/Jowheretogo