Live Theatre is back...and so is the summer panto. Delayed due to you-know-what, this tale of finding treasure and battling pirates finally made it to Tyneside. My son said "it was the best one we've done in a long while" before adding “even before the lockdowns”. We spent the second act laughing almost continuously as the show hit the sweet spot. Both parents and kids were getting involved and this turned into a fine slice of panto magic.

Normally with some pantos, the story is irrelevant as the 2 hours of antics rarely mentions the narrative - but with this  show, it does stick to the plot, even choosing songs, by Olly Ashmore, that fit the theme rather than use irrelevant hits out of the recent charts. 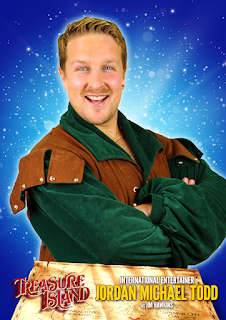 So ... what is the story about? Jim Hawkins (Jordan Michael Todd) has found a map marked with lost treasure and he is trying to find a boat to sail to the island in order to gain the riches. He finds Captain Cal Smollett (Cal Halbert) and his navigator Polly Perkins (Pippa Smith) who both agree to sail with him after finding a ship's cook. They sign up Long John Silver (Phil Dixon), who is pretending not to be a pirate and set off. There is also a side plot in which a Mermaid (Emma Deborah Ward) guides them. She wants to be turned back into a human, with a kiss naturally, after Long John Silver had turned her into a mermaid for refusing his advances.

This was our second summer panto - but the first one without social distancing - and it was great to witness the audience getting into the swing of things. However, the trouble with doing a show during a pandemic is that you may find that you suddenly need to use your understudies. This was the case tonight as the name on the poster, Todd Carty, had his role covered by Phil Dixon. As is usually the case with a good understudy, Phil did a brilliant job and you quickly forget that it was not the person that you expected to play the role. Phil commanded his role and was regularly getting booed at it in the second act. In fact, you know you've made it as the panto baddie when a little girl behind us yelled out "no one loves you!" at one point when he was outlining his next dastardly move. Magic! 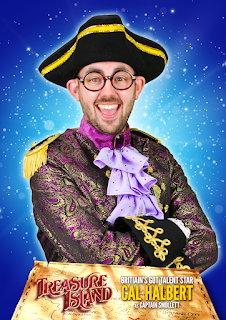 We have seen Cal Halbert in panto before, both here at the Playhouse and at the Customs House. Treasure Island is his best performance in a panto to date that we've had the pleasure to witness. He comes across relaxed and very funny making it easy for the kids to relate to his character. The one excursion into his familiar impressions was as Elvis. This was a scene which worked really well with its comic timing (thanks, in part, to the costuming routine Reece Sibbald and Pippa Smith were doing simultaneously). Cal had the audience laughing throughout as his character misinterpreted the instructions. 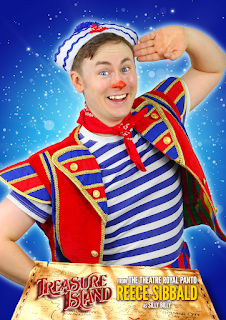 The comic role Silly Billy was well executed by Reece Sibbald, who also produced, wrote and directed the show. He was regularly at the centre of any mischief and could improvise rapidly. I got the impression that one of his fellow actors was surprised when, in response to being told that the audience member was called "Neil", he dropped immediately to his knees and knelt down. He is both naturally funny and responsive to the audience. I guess, as the writer, he was also responsible for the many fish jokes that kept coming up. 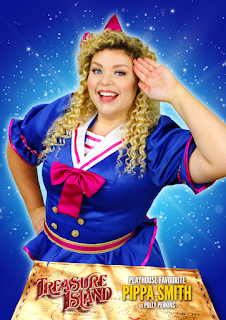 A good panto needs some straight characters that can also get involved with the jokes and the frolics and Pippa Smith's experience with panto shone through, especially in act 2 as the show gathered momentum.  Emma Deborah Ward, in her dual roles, and Jordan Michael Todd both did well, especially as they often had some heavy lifting to do in order to explain the plot at times.

This was a show in two halves. The first act was okay.. There was a story. There were jokes. There were songs and dance routines too. But it felt like it was going through the motions a little bit - some folk seemed a little nervous at times. The audience was a little muted - a bit more passive than you’d expect at panto, with the noticeable exception of half of row J who were determined to get the audience clapping along to the songs. Having said that: after a 2 year break, it takes a while for people to get in the swing of it. 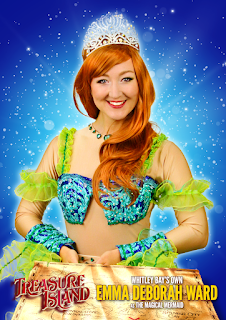 Then something magical happened at the interval. Was it the sugar rush in the kids? Was it the cast relaxing into their roles? Perhaps a combination of the 2. But whatever it was, the show elevated from ordinary to panto gold as the second act jokes and comedy skits landed. The songs, dance routines and general mayhem seemed to go up a number of gears. Thus the show ended up with a very organic, and well deserved, standing ovation - and the audience calling out for more.

It is a real pleasure to be, as an audience member, a part of a panto when it hits the sweet spot. When it does, each active member of the audience is an active component in the three ringed circus that makes this form of theatre both special and unique. You leave the theatre with a grin on your face. “That was fun” my son said afterwards. And he is right.

Treasure Island will play for a limited run of 9 performances from 18th – 22nd August 2021 at the Playhouse Whitley Bay. Tickets are priced from £14.50 and available from the theatre box office and online from our affiliates Ticketmaster UK: https://ticketmaster-uk.tm7559.net/Ea9WxW