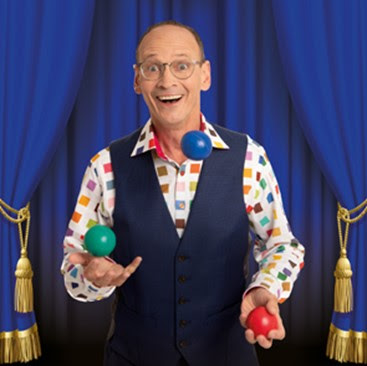 Following his much-loved appearances on Britain’s Got Talent 2020 and a performance in the final that left the judges breathless with laughter and saw him voted into the top three by the public, comedian Steve Royle is proud to announce that he will be setting out on his debut UK Tour in 2021 with a fun-filled evening for all the family.

Anyone who has ever witnessed one of Steve’s brilliantly unique performances will know to expect an evening packed with a crazy mix of stand up, slapstick and comical routines for all ages - a feast of entertainment for both eyes and ears of the young and old.

As well as being a finalist on this year’s Britain’s Got Talent, Steve is an actor, writer, comedian, juggler and Gillard Award winning presenter on BBC Radio Lancashire.  He performed as part of Peter Kay’s Phoenix Nights Live show at The Manchester Arena and has supported some of the UK’s top comedy talent on tour including Peter Kay, Dave Spikey and Roy Walker. He has appeared in a string of hit comedy TV shows including Phoenix Nights, Max and Paddy’s Road To Nowhere, Peter Kay’s Britain’s Got The Pop Factor… and Stand Up Britain and his acting work includes The Things You Do For Love and Magnolia, and the title role in the national tour of the critically acclaimed Naturally Insane: The Life of Dan Leno (which was due to premiere in the West End before lockdown happened). He was featured on the Granada TV Programme Behind The Scenes and That’s Entertainment and was voted Entertainer of the Year at the inaugural Red Rose Awards.