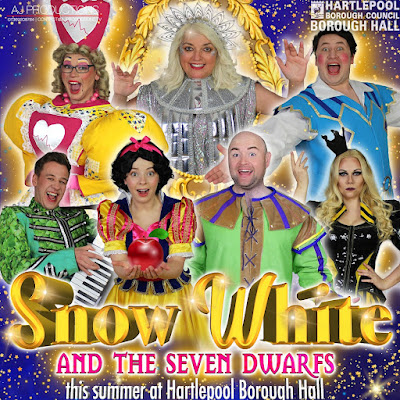 Recent years have seen pantomimes appearing in Hartlepool so the locals no longer have to make the trek across to Sunderland or, shudder at the thought, Darlington. There is an appetite for this type of show in the town as shown by the almost full house.

This was our first time at the Borough Hall which is on the historic headland. It seems to be a larger venue than the Town Hall Theatre and is opposite a handy free car park. The extra width meant that the three musicians could be placed prominently, on their own stage at the side, facing the audience and thus become a part of the show rather than hiding in a pit, or - as is most common these days in panto - on a tape as a pre-record. We liked seeing the live musicians, under musical  director James Harrison, in action.

We were admiring the room and discussing why it is not used more often when the show started and we discovered a problem. The acoustics in the room are lively to say the least and we struggled to make out what was being said on occasions. The dialogue from the Dwarfs, in particular, was hard to distinguish from our seat at the back. Unfortunately, the sound issue meant we didn’t always catch the punchline. This is a shame as the cast was working really hard to entertain everyone.

The cast worked well together, as an ensemble, to entertain the crowd. David Hopper and Gary Martin Davis as comic Muddles and Dame Nurse Nellie respectively work well as a comedy pairing with a good understanding of the panto format. They didn’t just break the fourth wall, they smashed it down. They worked the, sometimes reluctant, crowd well. 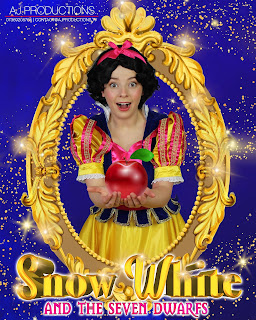 Occasionally the madness paused and some of the story was allowed to unfold. Hannah Woodward is having a successful professional debut as Snow White and is pairing well with Daniel Wilkinson who appears as the Prince. They both looked and acted like the part demands and the younger members of the audience will be happy with meeting them after the show, which is a nice touch.

We need bad guys in panto and Bethan Searle encouraged the necessary booing as Botoxia, the Wicked Queen. Her scenes with Stephanie Aird, as the Magic Mirror worked well. The show also included local impressionists Danny Posthill as the woodman Billy, tasked by the Queen to kill Snow White in the woods. His role gave him the opportunity to localise the script and carry out some impressions.

Snow White has many of the usual panto tropes, but not necessarily in the right order. Much of the first act had scenes which are common in pantos but they often appear later in the show. Packing these in before the interval resulted in the story being often forgotten for lengthy periods of time. The danger with over extending the first act past the hour mark is that the youngest members of the show start to be escorted out in order to use the venue’s facilities. Likewise, at the end of the show after Snow White is found by the Prince, rather than go into the community singing there was an extra comedy scene slotted in which seemed unnecessary. With some editing the show has all of the necessary ingredients to be a very good panto.

The panto is aimed at the whole family - so there are jokes about Frozen for the kids and Wetherspoons for the older ones. The industrious cast are becoming a tight unit who have the entertainment of the crowd at heart. Snow White is a fun show that reminded me of those ITV Summer Specials back in the day, and the kids appreciated the mayhem.