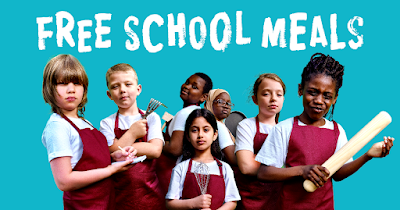 Northern Stage re-opens with a show with a clear social message about the last 18 months, and this time it is nothing to do with lockdowns or epidemics. Featuring a cast of 15 children supervising 2 adults. Typical of Unfolding Theatre, the cast lead the audience through a journey that will last longer than the one hour running time of the show itself - but the show is also entertaining too.

Our bubble had been allocated a table in Stage 2. It was clear that Simon Henderson's design was going to put the audience in the centre and most of the action was going to take place around us. The setting is a cafe, run by children, called "The Future" and the audience as there to be fed on opening night. The children introduce themselves and their older apprentice, Alex Elliott. They have also provided entertainment in the form of local musician Kay Greyson.

Now there is a problem in reviewing a short show that if I reveal much more about opening night that I will land straight into spoilers. Anyhow, the show is inspired by the episode last summer when a footballer, Marcus Rashford, used his influence to point out that children go hungry - especially during the holidays. A company that supplied the summer holiday food was getting away with a couple of vegetables, a few slices of bread, sliced cheese and a portion of dried pasta whilst overcharging the tax payer in the process. The supplier and the government were publicly embarrassed and made noises about the parcels not coming up to their standard. As the show's programme points out, 1 in 4 children who are below the poverty line are still unable to access free school meals. This is a sad state of affairs for a rich country like ours. 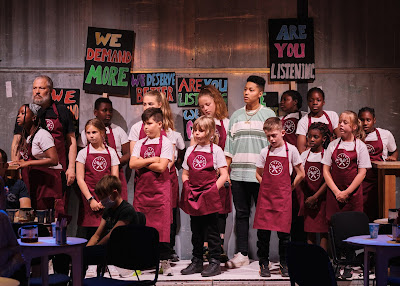 As the action unfolded we were served with a herbal tea and a small snack (though as the original publicity put it - don't go without your tea as it is just a small and very tasty snack.)

Luca Rutherford has written a show that gets a point over without too much lecturing. It is not too preachy and treads on the right side of the line. Director Annie Rigby has arranged the children so the action surrounds the audience, with each child getting a regular input. The actors are delightful and work really well in the tight space. 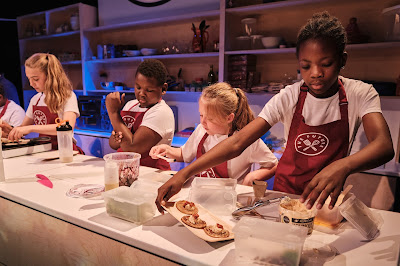 The programme points out that Kay Greyson is only 22 and yet it feels like she has been around for such a long time. She is a wonderful talent and her input into the show segued nicely with the main exposition. Alex Elliott is another great performer who is capable of a life changing performance. If I ever get around to writing the story about the North East Theatre Guide then he will be making a large appearance in chapter one after the Unfolding Theatre show Best In The World. This is another show in which the audience leave with a keep sake with a positive message on.

This is a show that deserves to be seen but is on a short run and only a limited number of spaces at each show. Free School Meals typifies the ability of theatre to be fully inclusive, entertaining and not afraid to make a point. But more than that, this show is tasty too!

We have missed Northern Stage so much and it is good to be back.