PANTO IS A TRIUMPH 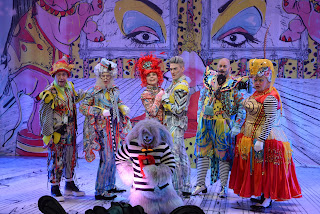 The Customs House panto has been a highlight of our theatre year for some time. It has reliably delivered that magical mix of lovable characters, great writing and fabulous design. As for the panto dame: if Carlsberg did panto dames then they’d copy Ray Spencer who controls the proceedings with sharp wit and experience.  This is one panto that fans of the genre make sure they attend. 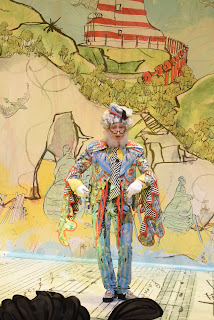 This year’s masterclass was based upon the local legend The Lambton Worm, a tale that was performed as a panto 150 years ago.  In this version, the young heir of the Lambton estate Brave & Bold Sir John Lambton (Steven Lee Hamilton) goes fishing and picks up an odd worm from the river. He tosses it down a well where it grows into a monster. At that time he is cruel to young Penelope (Georgia Nicholson) and she holds a grudge which leads to Poison Pen, as she becomes, wanting revenge using the worm-like monster.   Every panto has good guys and Suzie The Soothsayer (Natasha Haws) supports Dame Bella Ballcock (Ray Spencer) and his son, the hapless Arbuthnot (David John Hopper). Suzie makes their dog Puddles (Lewis Jobson) talk so he can warn them about the approaching dangers. In order to fight the monster Sir John is recalled from foreign travels in which he is busy getting to know the Sultan’s daughter, the Princess Aneesa (Eleanor Chaganis) much to the annoyance of the Sultan (Gareth Hunter). 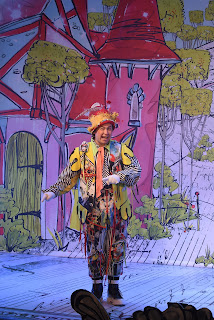 One of the features of the Customs House panto is the set design and costume design. Paul Shriek and Matt Fox have a definitely recognisable style and this permeates throughout each of the outfits and each part of the set. It is this level of attention to detail that applies to every aspect of the show. “It’s good enough” is not an apparent phrase used in planning the show. 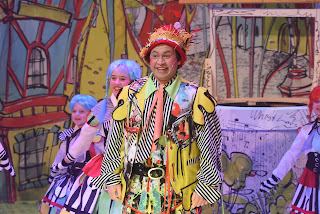 Not only does the panto look good, there is a real warmth in the room. The audience and the cast really seem to appreciate each other. Noticeable in this evening’s production was the number of all adult groups simply wanting to enjoy an evening full of feel good laughs. 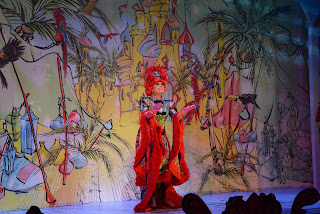 The cast can control the room. Natasha Haws is a lovely good and magical soothsayer whereas Georgia Nicholson attracts all of the booing from the crowd. The work the room nicely in their respective roles. Both are good singers too and, along with Steven Lee Hamilton, they deliver the musical interludes. 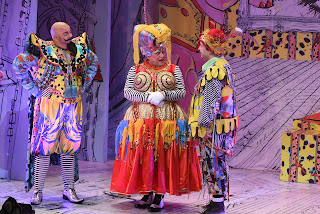 The real ringmaster of chaos is co-writer (along with Graeme Thompson), director, and panto dame Ray Spencer. Here is someone who is in control from the first “Eeeeee!” and “How rude!” through to the moment he stands back after the community singing to let the audience get on with it. The script is full of jokes, some of them for the kids, others will have the adults howling with laughter with the kids looking on blissfully unaware. 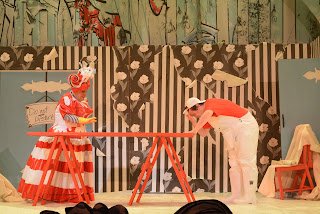 The messy scene, like last year, starts of with a few prat falls and “accidents” due to comic timing – and then ends up becoming a scene of survival as the mess turns the floor into a slippery hazard. Poor David John Hopper must finish the day black and blue as he crashes to the floor repeatedly. 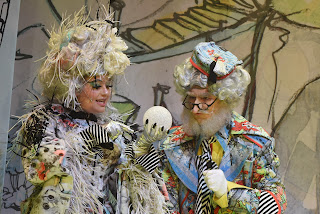 This is a really interactive experience as the action on stage interacts with the response from the audience. The younger crowd become animated, in particular during the take-off scene. The children screaming “it’s behind you” with a passion not seen in other pantos. The three-ringed circus involves the adults too as the adults react to Arbuthnot’s costume for the scene. 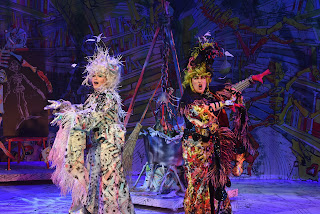 This is a 2½ hour experience that flies by quickly. Each of the cast members gets their spot from the talking dog Lewis Jobson through to the Mimic Men’s man of many voices Cal Halbert, who is making his panto debut.  We also had a team of young dancers who performed very professionally as they danced great choreographed routines from Jacqui West. 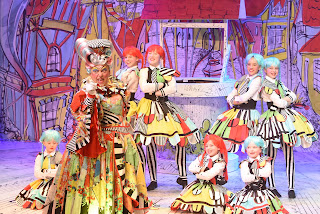 This is also a show that is good value, with adult tickets starting at £9.99 and a top price ticket costing £16.50. Prices are similar to a trip to a 3D film and much cheaper than most live sport or other forms of entertainment though a visit for refreshment at The Customs House will not leave you needing a remortgage.

The show looks good, feels good and had us buzzing about the many laughs we had this evening in the car ride home. It is another panto master class from Ray and the team.