Stockton ARC brings Your Best Guess, an outstanding piece of theatre created by Chris Thorpe and mala voadora to the UK in June 2018

Following its successful run at the Edinburgh festival in August, ARC is thrilled to bring Your Best Guess, created by Portuguese theatre company mala voadora and theatre-maker Chris Thorpe to the UK for eleven dates in June 2018. 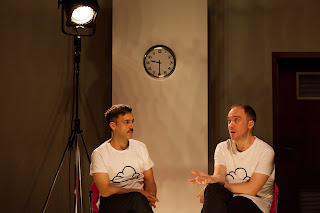 We can’t help living in the future: booking flights for our holidays, organizing birthday parties, writing applications, sending invitations, producing t‐shirts for tours... all of this are merely suppositions. When the time comes, those things may happen according to plan, or not. What if we could rewrite History? Or, at least, what if we could imagine that things might have gone a different way? Or anticipate all possible paths leading us to‐wards the future, so we could be prepared for any possible scenario? Or actually live in anticipation a certain event believing it will definitely happen?

mala voadora and Chris Thorpe talk about all of this; about the unpredictability of the course of history. About the history that actually happens and that which never took place after all. But also about undetonated bombs, goodbye letters, ghost cities, amulets... They will invest in their best guess

Annabel Turpin, Chief Executive of ARC, explains “Your Best Guess was by far the best show I saw at the Edinburgh festival this year, and I really wanted to bring it to the UK. I approached mala voadora and booked a two week tour to make it viable for them to perform here.”

The show is written and performed by Chris Thorpe and Jorge Andrade, who previously worked together in Third Angel’s touring show What I Heard About the World.

Annabel continues “It is a beautiful show and I am so excited about being able to present it not only at ARC, but also throughout the UK via our international collaboration with mala voadora. Sometimes you see a show and you just have to act on it.”

Chris Thorpe is considered to be one of the theatre world’s leading lights and has a huge following within the industry. He was a founder member of Unlimited Theatre and still works and tours with the company. He is also an Artistic Associate of live art/theatre company Third Angel. He has worked with, among others, Forest Fringe, Slung Low, Chris Goode, RashDash and Belarus Free Theatre. Your Best Guess opened at Lisbon's Almada festival in 2015, and is his fourth piece for the company. He also plays guitar in Lucy Ellinson's political noise project #TORYCORE and works with the National Student Drama Festival.

Chris  comments:  “I’m so excited that some of the work I’ve made with mala voadora over the past few years is finally getting to the UK. The fact it’s come about because Annabel and ARC are excited about the show makes it even better because ARC’s one of my favourite venues. This show is about what we do to keep faith in ourselves in uncertain times and I can’t wait for it to meet people over here.”

mala voadora was founded in Portugal in 2003 by Jorge Andrade (director, actor and playwright) and José Capela (set designer and architect), who are both responsible for the artistic direction. Besides Portugal, mala voadora has performed in countries such as Germany, Belgium, Bosnia-Herzegovina, Brazil, Cape Verde, Scotland, United States of America, Finland, France, Greece, England, Lebanon and Poland. mala voadora is biennially supported by the Ministry of Culture/General Directorate of Arts and is an associated structure of O Espaço do Tempo and ZDB.

mala voadora’s manager, Vânia Rodrigues said: “The story of this tour involves lost luggage, an old cinema in Edinburgh, meeting Annabel in a cafe very early in the morning, a lot of origami, and a longstanding friendship between mala voadora and Chris Thorpe.”
Posted by North East Theatre Guide at 21:17