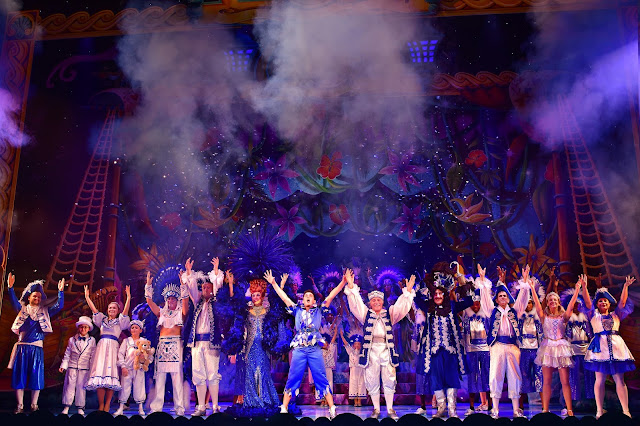 Having seen a few of the pantos at the Theatre Royal I could see the results of the effort put in to make this, the 13th one starring the father and son team Clive Webb and Danny Adams, extra special. The show has the high production values of a Qdos show but with a unique charm that comes from a local team. I thought I’d seen it all, I was wrong.
There were pratfalls aplenty and a lot of silly jokes to keep children and adults laughing. Acrobatic tricks that drew gasps from the audience, came from “The Drunken Pirates”, Sascha Williams and Stephanie Nock, and the amazing Timbuktu Tumblers.

The show managed to be something of a variety performance, with comedy, magic and vocal performances and surprises that just kept coming.

Danny (as Peter Pan) and Clive (as Smee) still have the audience creased and Danny’s brother Michael Potts reprises his classic “Idiot” role which somehow works so well. Chris Hayward brings the glamour as the dame Mrs Smee. Rita Smee had some absolutely stunning costumes created by Chris himself. Nana the dog was a superb costume and well played by whoever was in there, but only appeared for a short time. Steve Arnott played an imposing and even quite likeable Captain Hook. His makeup was superb. It was almost sad to see him gobbled up so dramatically by TicToc the crocodile. Pete Peverley played  a very, very Geordie Starkey, the vital sidekick to Captain Hook.

Tinker Bell was played delightfully by Laura Evens and rival for Peter’s attention, Wendy was played by the charming Julie Cullen.

The Darling children were depicted by young actors who never put a foot wrong and the Marron Theatre Arts students who played the Lost Boys were excellent.

One thing I’m glad was missing is a “3D” movie section of the show. Clever use of screens and technology used the genuine 3 dimensions of the stage to make people fly and a great beast leer out into the audience. This part was sterling work from The Twins FX.

This is an epic production that is a credit to the large team behind it. From the producer/director Michael Harrison, Theatre Royal Orchestra, the special effects specialists and the choreographer to the lighting and pyrotechnics, the show is a masterpiece of Panto.

Tickets:
Peter Pan appears at Newcastle Theatre Royal from Tuesday 28 November 2017 – Sunday 21 January 2018. Tickets go on general sale on Tue 22 Nov from £13.00 and can be purchased from the Theatre Royal Box Office on 08448 11 21 21 (calls cost 7ppm plus your phone company’s access charge) or book online at www.theatreroyal.co.uk.

Tickets are already on sale for next year’s panto too!: 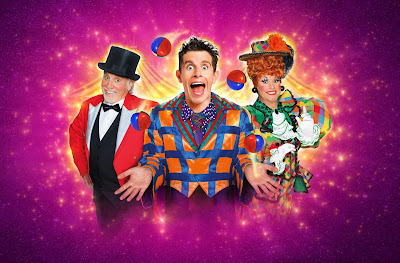 Goldilocks, the pantomime that’s just right! plays Tuesday 27thNovember 2018 – Sunday 20th January 2019 and tickets are now on public sale.
Tickets are from £13 and can be purchased from the Theatre Royal Box Office on 08448 11 21 21 (Calls cost 7ppm plus your phone company’s access charge) or book online atwww.theatreroyal.co.uk.
Posted by North East Theatre Guide at 00:18